Tara Browne was another well-known member of the swinging London set and was an heir to the Guinness family fortune. He had been present in December 1965 when Paul McCartney injured himself in a moped accident in which he chipped a tooth. He was a friend of both McCartney and Brian Jones but is principally remembered for his death.

On 18 December 1966, Browne was driving with his girlfriend, model Suki Potier, in his Lotus Elan through South Kensington at high speed. It has been reported that he had been taking LSD with Paul McCartney earlier that evening. He failed to see a traffic light and proceeded through the junction of Redcliffe Square and Redcliffe Gardens, colliding with an oncoming car and died of his injuries the following day. Potier claimed Browne swerved the car to absorb the impact of the crash to save her life.


John Lennon later recorded this event for posterity when he wrote the song ‘a day in the life’ for the Sgt Pepper album. 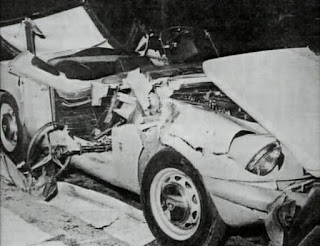