False Rumour - The beginning of the PID myth?

When this article appeared in the Beatles Monthly Magazine it gave birth to the biggest Beatles conspiracy of them all - that Paul McCartney had been killed in a car crash. Was this a deliberate ploy or purely incidental? You decide. 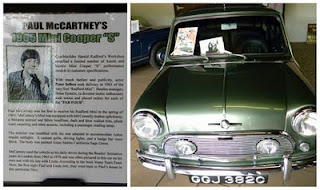 The full story claims that a party consisting of McCartney, Mick Jagger, Keith Richards, Brian Jones, Robert Fraser and Christopher Gibbs head off to Richard’s Redlands home in Jagger’s mini cooper. This leaves Mohammed Chtaibi to follow behind in McCartney’s car. There is no way six, fully grown men, could fit in.

The accident happens, supposedly, on the M1 motorway. This is a stretch of road that heads north out of London. Richard’s Redlands home is in Sussex on the south coast. They are going the wrong way! I have read that they intended to swing past Jagger’s Hertfordshire home first. To the best of my knowledge Jagger lived in central London and did not own a home in Hertfordshire.

The full story also claims that Chtaibi struggled to keep up with the other mini cooper. This is despite the fact that Jagger’s cooper is weighed down by six adults!

Next, a stray seatbelt hanging from the car Chtaibi is driving causes the car to crash into a lamppost. I suggest looking at the photos of Marc Bolans mini after it hits a tree and kills him. That his wife survives is a miracle, and he was not travelling down a high speed motorway at the time of his crash. If Chtaibi did crash he would have died. Yet here he is just a month later at Redlands just before the infamous bust. He looks surprisingly healthy.

This whole story is blatant disinformation. Consider the date, 7 January 1967. Not a month since the death of McCartney and Brian Jones great friend Tara Browne. He, of course, did die in a car crash. It is also the same date that Lennon writes ‘A Day In The Life’ for the Sgt Pepper LP, a song about that very event.

By this stage Robert Fraser and McCartney would have been heavily involved in the planning of the Sgt Pepper sleeve and its coded messages and funeral for a friend scene.

This whole story would be extremely crass were it not designed with a higher purpose in mind. It is the first example of a car crash story which is a theme they return to with regularity after this point. I believe they engineered the whole PID story as a hoax, and though the complete picture may not have been envisaged at this stage, it is the first planted seed of the whole mystery.