So what do we know about Tara Browne?


Tara Browne and the Rosy Cross

So what do we know about Tara Browne?

By the time of his death on December 18, 1966 he was married to Noreen McSherry the daughter of a County Down farmer. The couple had two children, aged three and one, and were already estranged in what was then a very public battle for custody in the High Courts. Browne was born on 4 March 1945, to Dominick Browne, 4th Baron Oranmore and Browne, a member of the House of Lords since 1927 who later became famous for having served in that house longer than any other peer, finally being evicted during government reforms in 1999; and Oonagh Guinness, heiress to the Guinness fortune and the youngest of the three "Golden Guinness Girls".

It has been widely reported that Tara was educated at Eton, but this is not the case, he was, however, due to inherit around £1 million on his 25th birthday. Even at the age of 21, he left £56,069 in his estate, a sum which would have made him a millionaire today. His inquest described him as a man of "independent means". 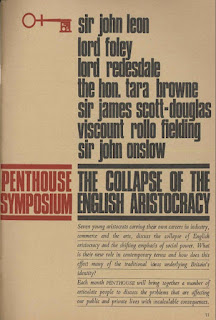 Despite this wealth he worked. According to a 1965 symposium in Penthouse magazine to which he contributed he was employed at Len Street Engineering, a Lotus dealership in Bayswater, presumably where he obtained the ill-fated Lotus Elan which would take his life?

He also co-owned Dandie fashions on the Kings Road in London. After his death Tara’s share was bought by the Australian, John Crittle, who would transform it with the Beatles into Apple tailoring. Indeed, on the night of his death Tara was on his way to discuss designs for the shop front with graphic artist David Vaughn of Binder, Edwards and Vaughan who also painted a piano for Paul McCartney that he still uses on stage.

He was seen with a string of girlfriends including Amanda Lear, who was rumoured to have been born a man, and Suki Potier. Tara was with Amanda Lear in Paris when he introduced her to the artist Salvador Dali and she would go on to be his muse for the rest of his life. I have often wondered if the Paul McCartney painting entitled ‘Tara’s plastic skirt’ is a veiled reference to Amanda Lear and her rumoured sex change operation.

He was photographed with Suki Potier at his 21st birthday party, alongside Brian Jones, and she would go on to date the Rolling Stones man after Tara’s death and was living with him when he died in 1969. Suki was with Tara at the time of his death and was the passenger in his Lotus. According to her, Browne tried to avoid a car coming straight at him. He swerved to avoid it and crashed into another one trying to save her. Potier claimed Browne was not going particularly fast when he drove down Earls Court Road into Redcliffe Gardens, but independent witnesses at the inquest suggested otherwise and their testimony would appear to be borne out by pictures of the crumpled bonnet and torn-off roof of the sports car.

Little has been made about the occupant of the ‘other car’ but I wonder if it may have been a certain Paul McCartney? Suki escaped unhurt but would go on to be killed in a car crash in 1981 with her then husband Robert Ho. It is rumoured she forced the car to swerve over a ravine after her husband asked her for a divorce.

Tara is known to have experimented with LSD and it has been claimed that he and McCartney had been taking it on the night of his death. Tara was also with Paul McCartney one night around Christmas 1965 when the Beatle was involved in a motorcycle accident and chipped a tooth.

The Browne family home is Luggala, Co. Wicklow, Ireland. In 1937, Ernest Guinness bought Luggala and gave it as a wedding gift to his daughter, Oonagh, on her marriage to Lord Oranmore and Browne. Oonagh was famous for her 'raffish weekend' parties at Luggala. Guests were driven around at breakneck speed in the Rolls Royce, one guest saying it was like 'being driven from Sodom to Gomorrah'! It became a haven for the intelligentsia of Dublin as well as artists and musicians from around the world. 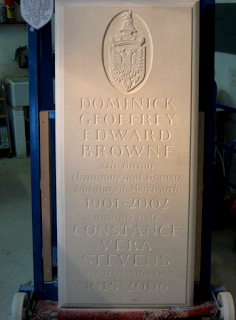 As mentioned previously, Tara came from a distinguished family and his father served in the House of Lords. The gravestones of both Tara and his father are extremely interesting for the symbolism displayed. Both feature the family crest – a double headed eagle – whilst his father’s features a griffin above the eagle. The double headed eagle is the emblem of the thirty second and thirty-third (and highest) degrees of Scottish Rite Freemasonry.

Definition: Double-headed Eagle: A Masonic seal and initiation symbol. The eagle is a universal symbol representing the sun, power, authority, victory, the sky gods and the royal head of a nation.

Alternatively, according to Manley P. Hall, 33rd Degree Freemason, what is being depicted in this symbol is actually a double headed phoenix, not an eagle, he says:
“Among the ancients a fabulous bird called the Phoenix is described by early writers ... in size and shape it resembles the eagle, but with certain differences. The body of the Phoenix is one covered with glossy purple feathers, and the plumes in its tail are alternately blue and red. The head of the bird is light in colour, and about its neck is a circlet of golden plumage. At the back of its back the Phoenix has a crest of feathers of brilliant colour. The Phoenix, it is said, lives for 500 years, and at its death its body opens and the new born Phoenix emerges. Because of this symbolism, the Phoenix is generally regarded as representing immortality and resurrection ... The Phoenix is one sign of the secret orders of the ancient world and of the initiate of those orders, for it was common to refer to one who had been accepted into the temples as a man twice-born, or reborn. Wisdom confers a new life, and those who become wise are born again.”

A phoenix is a mythical bird and has long been presented as a symbol of rebirth, immortality, and renewal. 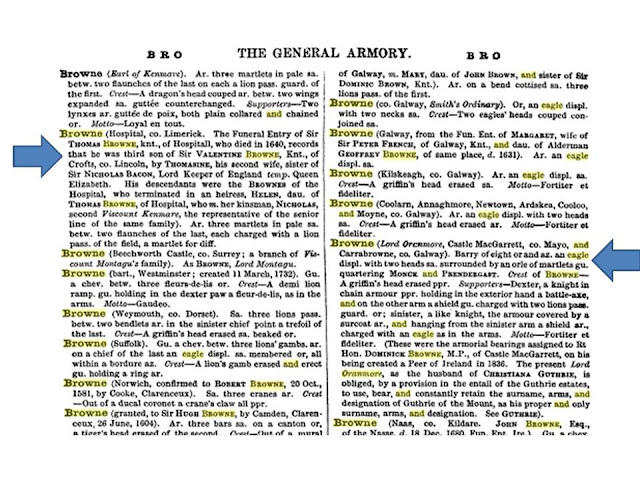 In my research into the family history of the Oranmore and Browne’s I have discovered a possible family link to a Sir Thomas Browne. Sir Thomas was the son of Sir Valentine Browne and his wife, Thomasine. Thomasine was the sister of Sir Nicholas Bacon, Lord-Keeper of England and loyal servant of Queen Elizabeth I. Sir Nicholas is also the ‘father’ of Sir Francis Bacon. As I have hinted at in my YouTube movies, Sir Francis Bacon is the rumoured illegitimate son of Queen Elizabeth herself and a possible author the works of Shakespeare. Bacon is also believed to have been a leading Rosicrucian and possibly faked his own death. Certainly the works of Bacon and his ‘new science’ influenced the founders of the Royal Society (forerunner of modern freemasonry whose members included Christopher Wren and Issac Newton) which was founded in November 1660, after it was granted a Royal Charter by King Charles II, who it just so happens, is an ancestor of Tara Browne.

I have suggested that the funeral scene depicted on the sleeve of the Sgt Pepper album is a funeral for a friend, and that friend is Tara Browne. After all, he died whilst the album was being produced, his death had a profound effect on Paul McCartney, John Lennon wrote about his death in ‘A Day in the Life’ and the whole cover image was overseen by Tara’s friend Robert Fraser. I have also argued that there is a lot of masonic symbolism depicted on the cover. There are eleven freemasons amongst the cast of ‘people we admire’, and three of these are 33° masons, Karl Marx, H.G. Wells and Aleister Crowley. Indeed if you place a compass over the record cover, Karl Marx and H. G. Wells are placed at exactly 33°. There are the twin temple pillars of Boaz and Jachin as depicted by Sonny Liston (Sun) and Diana Dors (Moon). There are the three appearances of Shirley Temple, one of which features a blood stained model car placed on her lap, possibly a direct reference to Tara’s accident, and the inclusion of the masonic figure of the Legionnaire of the Royal Order of Buffaloes.

Furthermore, hidden in the final shot by the Beatles themselves, is an image of Bette Davis dressed as Queen Elizabeth I from the film ‘The Private Lives of Elizabeth and Essex’.

Could this be a reference to a line of descent from the Queen to Tara Browne?

What is the Sgt Pepper Code? Did the Beatles have access to hidden knowledge about the origins of Christianity? Were they taught the secrets of the Freemasons? Had they discovered the history of the Knights Templars or the occult connections of the Illuminati to whom they became exposed? Does the inclusion of Aleister Crowley on the record sleeve reveal their satanic black magic – or black magick -  roots?