The Beatles and Secret Societies

The Beatles and Secret Societies 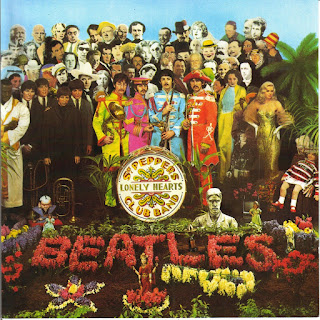 Does the Sgt Pepper LP cover reveal secrets of an O.T.O initiation? Could it be a Gnostic Mass? Is it a funeral for a friend? Could it be a homage to long lost pagan deities?

Quite possibly it could be all of the above and more. The ‘cast’ of ‘heroes and people we admire’ includes at least eleven freemasons, three temples, hidden messages, and a burial scene. There are a host of hidden characters as well as a number who were dropped, removed or edited out.

Let us then consider the circumstances.

The search for the light:-

By 1966 The Beatles were searching for answers. Spiritually they were confused. Worshiped by millions, yet deeply flawed, were they Gods or mere mortals?

They had abandoned touring, sick of the screaming hordes and the death threats. The ‘bigger than Jesus’ furore had revealed more than just the gaping wound of American religious insecurity. They were, by now, being influenced by more than the paternalistic overtures of Brian Epstein and George Martin.

They had entered a new sphere of influence, one with a very definite agenda. During the 1960s, McCartney was often seen at major cultural events, such as the launch party for The International Times and at The Roundhouse (28 January and 4 February 1967 respectively). He also delved into the visual arts, becoming a close friend of leading art dealers and gallery owners, explored experimental film, and regularly attended movie, theatrical and classical music performances. His first contact with the London avant-garde scene was through John Dunbar, who introduced him to the art dealer Robert Fraser, who in turn introduced McCartney to an array of writers and artists. McCartney later became involved in the renovation and publicising of the Indica Gallery in Mason's Yard, London.

John Lennon first met Yoko Ono at the Indica at the infamous Unfinished Objects and Paintings show. This show was sponsored by Robert Fraser.

Miles opened his bookshop, in September 1965 at the Indica gallery and it was here that John Lennon obtained his copy of ‘The Passover Plot’ and was introduced to the works of Nietzsche.

The following John Lennon quote is taken from The Boston Globe of Dec. 12, 1980. “My views on Christianity are directly influenced by a book, The Passover Plot by Hugh J. Schonfield. The premise in it is that Jesus’ message had been garbled by his disciples and twisted for a variety of self-serving reasons by those who followed, to the point where it has lost validity for many in the modern age.”

The theme that Lennon took from ‘The Passover Plot’ was that Jesus, far from being born of a virgin as the son of God, was in fact a master manipulator who carefully engineered his position.

Indeed, he had attempted to fake his own death on the cross, so that he could be ‘resurrected’ and duly considered the true messiah.

His plan unravelled when an overzealous Roman soldier plunged a spear into the side of Jesus whilst still on the cross. Jesus’ plan to be resurrected had died with him. From here on, the word of Jesus was left in the hands of his disciples, mere foot soldiers who knew only as much as Jesus had entrusted to them.

One can see from this some clear similarities here with freemasonry, and indeed all other secret societies, in that only the initiated know the truth whilst everyone else peddles the old conventional story.

Lennon had begun to believe that he, and McCartney, rather than creating the Beatles hits were channelling them via some divine force.

It was into this world of messianic self-belief that Robert Fraser was introduced. He had met McCartney when he had visited Fraser’s gallery and he immediately sensed the opportunity to ensnare the Beatles into his web.

Eton educated, this son of a wealthy banker was a former officer in The Kings Rifles, and a conduit to all the major players in Swinging London as well as the more subversive, darker elements of the criminal underworld. He was a friend of gangland killers The Krays. Spanish Tony Sanchez claims in his book that Fraser owed £20,000 to the Krays through gambling debts and that they had been leaning on him for repayment. Sanchez claims he visited the twins and sorted out the problem.

Fraser, along with his sidekick, Christopher Gibbs, the nephew of a former Governor of Rhodesia, would over the next few years be at the heart of all the major incidents involving not just the Beatles but also the Rolling Stones.

He was also the guiding light behind the creation of the Sgt Pepper cover. It was he that persuaded Paul that the original album sleeve, designed by The Fool, was not good enough and that he should employ the services of Peter Blake.

The whole ‘concept’ behind Sgt Peppers was that it was about killing off The Beatles. The death of the lovable mop tops. McCartney had come up with the idea on a flight back to England from Kenya with Mal Evans, late in 1966.

“We were fed up with being the Beatles. We really hated that fucking four little mop-top boys approach. Then suddenly on the plane I got this idea. I thought, let's not be ourselves. Let's develop alter egos so we're not having to project an image which we know. It would be much more free. What would really be interesting would be to actually take on the personas of this different band.” Paul McCartney, Many Years From Now, Barry Miles.

In essence they were forming a band comprising their alter egos who could be sent off on tour instead of them. What it evolved into once Fraser had become involved was something quite different.

The album was a revelation, both musically and socially, and the album sleeve as truly an iconic image of the twentieth century as any. At its heart a wealth of symbolism, a cast of stars and clues for the initiated only. The centre-piece was a drum with the legend “Sgt. Peppers Lonely Hearts Club Band”. When a mirror is placed over the centre of the drum, over the words ‘Lonely Hearts’ a mirrored message appears stating ‘I one IX ^ He Die’. For the believers this meant that McCartney had died on either 11 September or 9 November, dependent upon which side of the Atlantic you lived.

If you reverse the numbers you get 911. Revelation 9:11 reads; ‘And they had a king over them, [which is] the angel of the bottomless pit, whose name in the Hebrew tongue [is] Abaddon, but in the Greek tongue hath [his] name Apollyon’.

For Apollyon read Apollo. Apollo is hugely significant in Beatle lore. Apollo is a sun god, he is Mars, and he is Lucifer. He is also a god of music and it is interesting that McCartney, a self-appointed god of music should use the pseudonym Apollo C Vermouth for some of his production work.

Diana Dors is one of the celebrities featured on the album cover where she is stood next to Shirley Temple and a Legionnaire of the order of buffaloes. Diana (Artemis) is the twin sister of Apollo and is highly significant as a figure of pagan worship and a lunar goddess.

The album cover famously features an image of Aleister Crowley, a leading occultist and founder of the O.T.O or Ordo Templi Orientis (Order of the Temple of the East). O.T.O enthusiasts claim this organization is an offshoot of Templar freemasonry and it is claimed that Crowley’s title in the O.T.O was Phoenix. Could it be that the Beatles were trying to raise the phoenix from the flames?

Shirley Temple features three times on the record cover and is a symbolic representation of three temples. The two temples to the East of the cover signify the first and second incarnations of the Temple of Solomon. Her image on the West of the cover is obscured and represents a hidden temple, Boleskine? Rosslyn? Abbey Road? St Pauls? Maybe it is not a reference to an actual, historical location but represents the lodge to which the Beatles have been initiated?

There are eleven freemasons on the cover and three of these are 33° masons. Crowley is one and the other two are Karl Marx and H.G.Wells? If you place a compass over the cover of the album Marx and Wells actually appear at 33°. Coincidence? I doubt it.

Add all these factors together and it does appear that either the Beatles had been indoctrinated with a wealth of knowledge concerning secret societies or they had been inducted into one. Robert Fraser would be my prime candidate as the leading protagonist in all this. His background, education and standing in society would have made him a prime target for recruitment into a masonic type organisation. His friendship with Kenneth Anger and his interest in what Anger preached could mean that the O.T.O may have been an attractive organisation for him and the Beatles to join.

Clearly, lots of people would have liked a finger in the Beatles pie and Epstein does appear to have been edged out and was a more peripheral figure. There are lots of conspiracy theories that maintain the Beatles were being used by Tavistock style operatives to push the pro-drug agenda or to corrupt American youth. Who knows if there was a government angle or a covert operation in play here? For me though, this is about a burgeoning interest in the occult and the opportunity, for some, to manipulate and profit from the Beatles.