The above image shows the bloody and swollen face of Paul McCartney purportedly in the immediate aftermath of a motorcycle accident that he had been involved in. The image is often stated as being one of the catalysts of the Paul is Dead myth. As with all things McCartney nobody seems to have a clear memory of events. Here is what the man himself said about the incident.

I had an accident when I came off a moped in Wirral, near Liverpool. I had a very good friend who lived in London called Tara Browne, a Guinness heir - a nice Irish guy, very sensitive bloke. I'd see him from time to time, and enjoyed being around him. He came up to visit me in Liverpool once when I was there seeing my dad and brother. I had a couple of mopeds on hire, so we hit upon the bright idea of going to my cousin Bett's house.


We were riding along on the mopeds. I was showing Tara the scenery. He was behind me, and it was an incredible full moon; it really was huge. I said something about the moon and he said 'yeah', and I suddenly had a freeze-frame image of myself at that angle to the ground when it's too late to pull back up again: I was still looking at the moon and then I looked at the ground, and it seemed to take a few minutes to think, 'Ah, too bad - I'm going to smack that pavement with my face!' Bang!


There I was, chipped tooth and all. it came through my lip and split it. But I got up and we went along to my cousin's house. When I said, 'Don't worry, Bett, but I've had a bit of an accident,' she thought I was joking. She creased up laughing at first, but then she went 'Holy...!' I'd really given my face a good old smack; it looked like I'd been in the ring with Tyson for a few rounds. So she rang a friend of hers who was a doctor.


He came round on the spot, took a needle out and, after great difficulty threading it, put it in the first half of the wound. He was shaking a bit, but got it all the way through, and then he said, ''Oh, the thread's just come out - I'll have to do it again!' No anaesthetic. I was standing there while he rethreaded it and pulled it through again.


It caught on with the guys in the group: if one of us did something like growing his hair long and we liked the idea, we'd all tend to do it. And then it became seen as a kind of revolutionary idea, that young men of our age definitely ought to grow a moustache! And it all fell in with the Sgt Pepper thing, because he had a droopy moustache.

The quote above was taken from the Beatles Bible website which dates the incident as Sunday 26 December 1965. So therein lies problem number one. Paul claims there was an “incredible full moon”, only if one checks that statement out [HERE] it will reveal that the moon was actually in a new moon phase on this date, ergo, no moon would have been visible.

So could Paul be mistaken about the date? After all he is recalling events some 25 – 30 years later. The Beatles Bible website also quotes Brian Epstein; “Last mid-December, Paul injured his lip and chipped his tooth in the moped accident. He honestly thought no one would notice the chip, for it is so small. I told him three times he should do something about it. It is in a place where there are no nerve ends, so there is no pain. Paul assured me that he would have the tooth capped, but - unfortunately - he has not done so. Could he be afraid of the dentist? It is my opinion that he will just let it be.”

As we can see Mr Epstein recalls it as being mid-December. That would certainly fit the full moon hypothesis; but wait.


The above image is taken from Mike McCartney’s book Thank U Very Much and, though he doesn’t give a specific date, he does imply that the incident took place in 1966. So just when exactly did this occur? 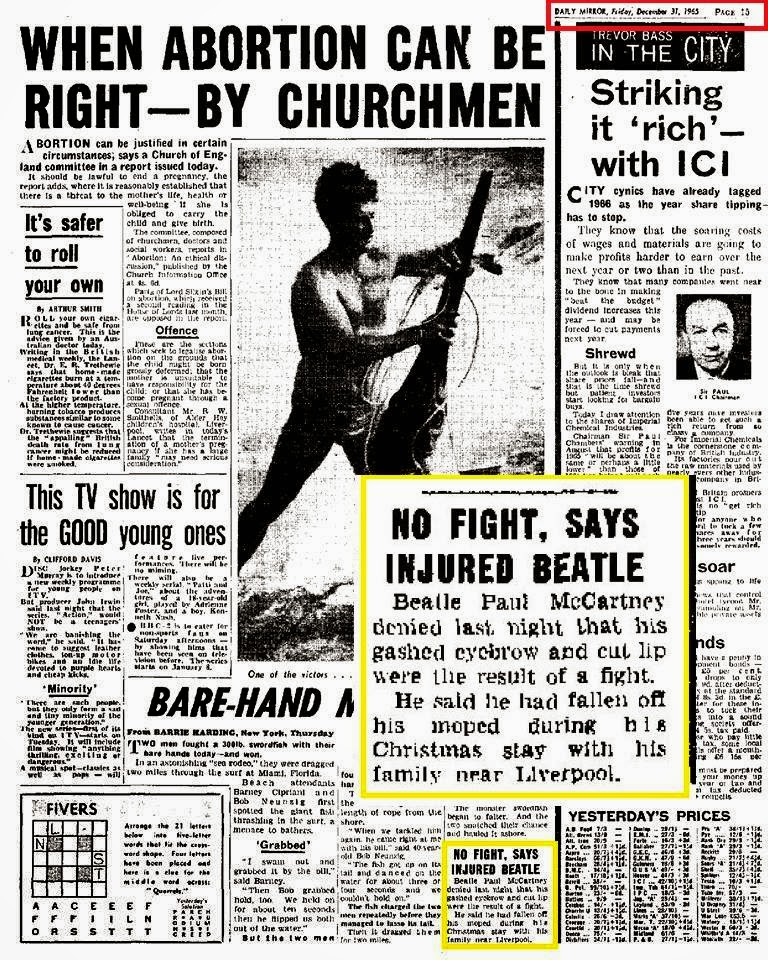 This newspaper article dated December 31 1965 would seem to make it clear that the moped mystery had just happened but, there was no fight, upon that they are quite explicit. So, why not print the photo that we now know Mike McCartney conveniently took? After all, was it not taken because; “…it’s the truth.”

The truth, sadly, always seems to be in short supply where the Beatles are concerned. Certainly something happened in December 65, but was it a moped accident? Could it have been a fight? Possibly a lovers tiff between Paul and his riding companion, the doomed Tara Browne?

Allusions towards a relationship between the two were often made by the sometime poster to the NIR and TKIN forums, Apollo C. Vermouth, who may, or may not, have been Neil Aspinall.

Here is a selection of relevant posts;


There was "no going back" from that event. (despite later pleas to reconsider) Everything that happened beyond that point had to follow script.


Like I said, I simply was playing around with the premise.


But, to answer your query, if Paul and Tara were both killed in seperate accidents, and the "Paul" from Sgt. Pepper was not who he seemed, then regardless of any relationship betwixt the two, the new "Paul" would have no reference to that friendship. It would fall on the other three to point it out.


From all accounts, John did not seem to be that close to Tara, citing that "A Day in the Life" was written partially about "that Guinness CHILD." No love lost there, it appears.


You bring up some valid points.


I have always felt the lines from McCartney's, "Venus and Mars" dealt briefly with a slightly intoxicated Tara leading up to the accident.


"Red lights, green lights, strawberry wine, a good friend of mine, follows the stars, Venus and Mars are alright tonight.'


Tara was known, through his personal wealth, to be able to hang with the hip crowd of the day.


"He blew his mind out in a car, he didn't notice that the lights had changed."


I'm sure there are other references to him, sprinkled about Paul's solo work.

The whole reference to "Venus and Mars" itself may need a closer look as well.


It is semi-apparent that mythology may play a significant role in unfolding the story line.


I'll take a peak and see what I can find. Anyone care to join me?


Now, whomever this, now silent, poster was, they possessed a rare insight and they imply a relationship between Paul and Tara. They also imply that the story told on the Sgt. Pepper cover is not necessarily one of Paul’s death and that it can be revealed via mythology. In another post Apollo C. Vermouth states; As far as "Venus and Mars" are concerned, there are several differing stories. Venus is the god of peace, Mars the god of war. They were lovers, such as Hyacinthus and Apollo were lovers to a different degree.

Why does this matter you may ask? Well apart from the moped mystery being another example of an incident that nobody can agree upon, the Mike McCartney book throws fresh light on another pet subject of mine, namely the so-called - by me - Phoney Document.

This is the document that appears in the Iamaphoney movie and purports to be an extract from the long-lost and near mythical Mal Evans book ‘Living the Beatles Legend’. In it Mal recants his memories of sacking McCartney’s butler, George Kelly. The implication from the Phoney Document is that this happened immediately upon Paul’s return from Kenya – where he may or may not have been killed, re-born, replaced, trepanned or received plastic surgery depending on your personal pet theory – in November 1966.

Now the usually reliable Bill Harry places this event as having taken place in January 1967 and states that the reason they were sacked was due to them having sold an article to an Australian magazine. Taken with confirmation from Mr Harry that the Kelly’s were McCartney’s first housekeepers then the note at the bottom of the page of Mike McCartney’s book becomes very telling; The fab pic was eventually stolen from Cave Avenue by a ‘butler’ and sold to an Italian mag to illustrate ‘wild Beatle drug parties in swinging London’.

Now the use of the word ‘eventually’ does nothing to help us nail down exactly when this happened; November 66 or January 67, but, the assumption we are meant to glean from Mal’s words are that the real reason the Kelly’s were fired was because they may have recognised the post Kenya McCartney as an imposter; 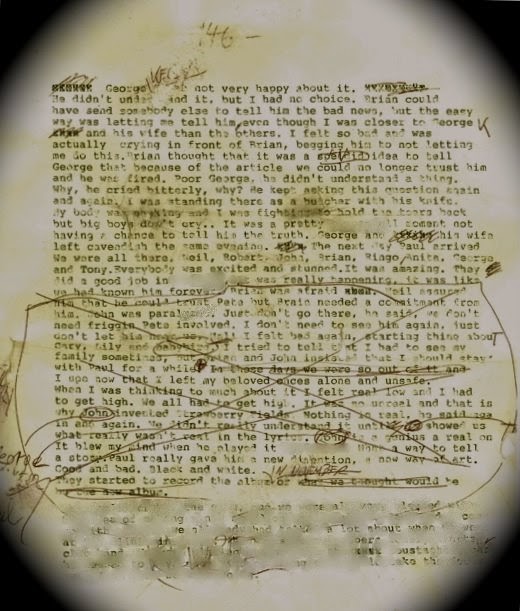 Why, he cried bitterly, why? he kept asking this question again and again. I was standing there as a butcher with his knife.

My body was shaking and I was fighting to hold the tears back but big boys don't cry. It was a pretty [word blanked] moment not having a chance to tell him the truth. George and xxxx his wife left cavendish the same evening.

Could also the fact that Paul had the moped mystery photo at Cavendish Avenue and the fact that he made no attempt to hide the lip scar or cap the tooth for a good six months be because he wanted there to be a visual reminder of that night? So that every time a certain person looked at his face they would be transported back to that night and their actions?

Could it be that the Kelly’s were sacked, not because of a breach of trust, but because they had inadvertently revealed evidence of a relationship McCartney wanted to keep very quiet? 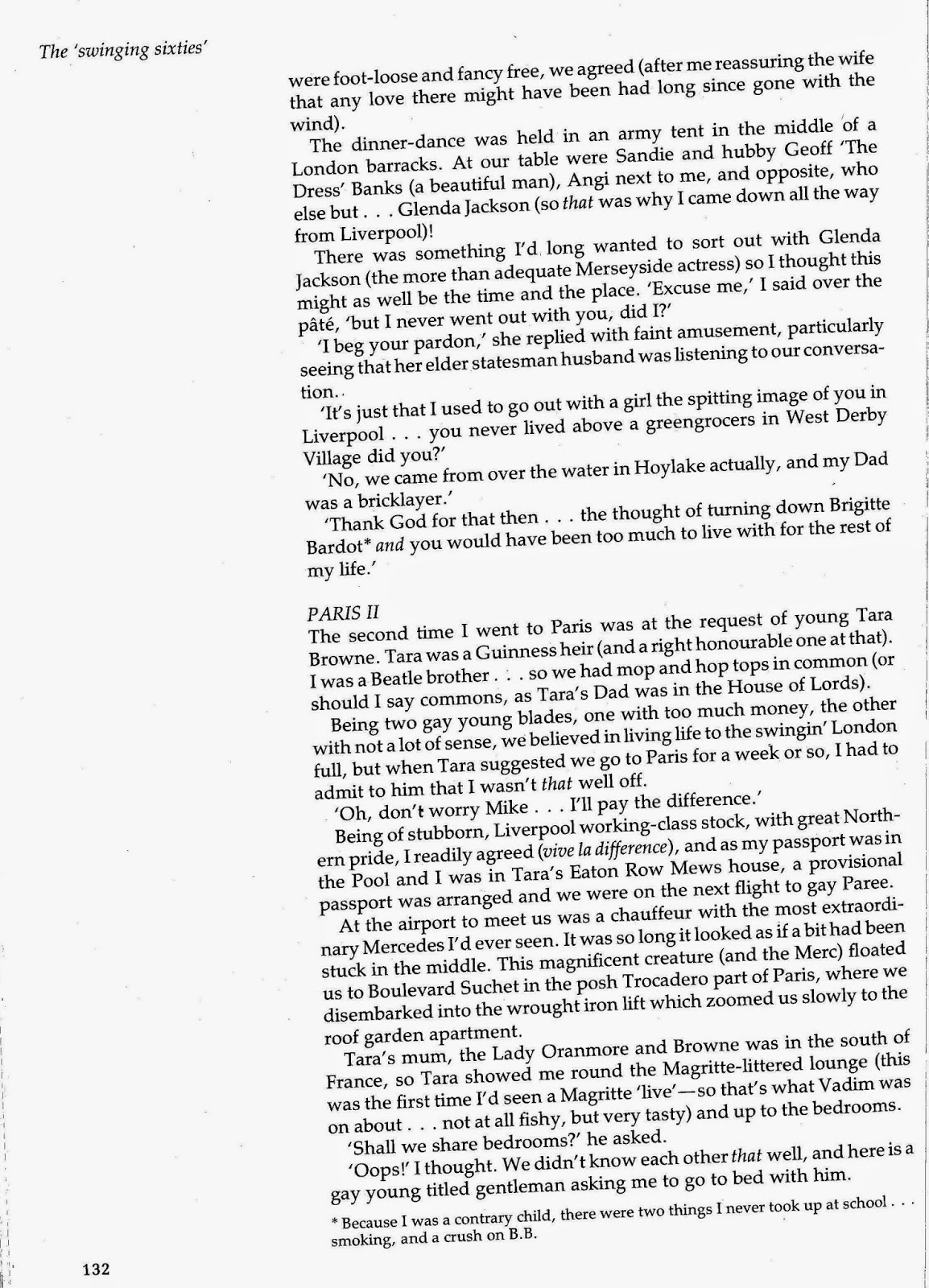 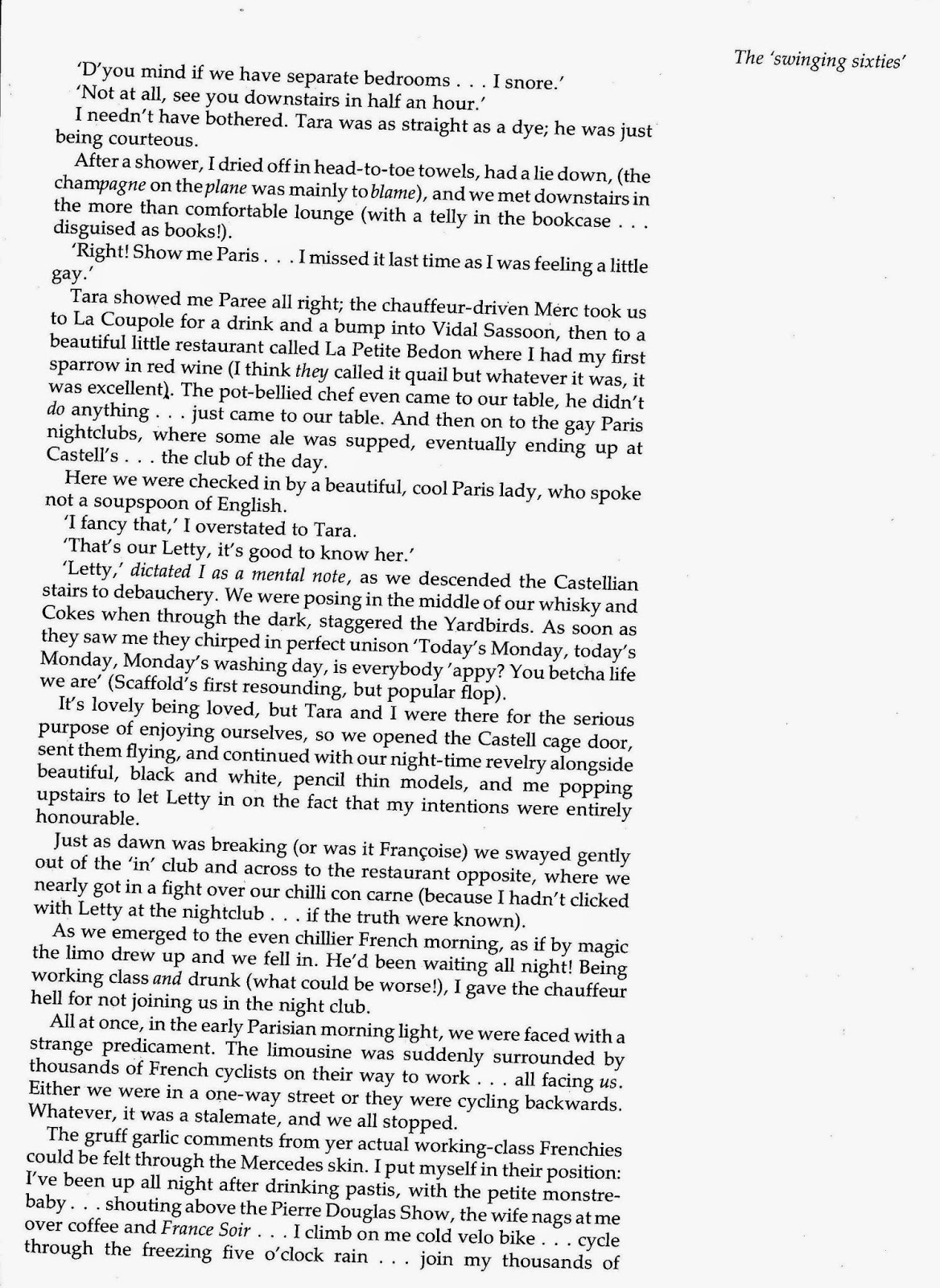 Posted by Redwel Trabant at 06:39 No comments: