I write this as a short appraisal of, what I shall ingeniously refer to as, the ‘Phoney Document’ that appears in Iamaphoney’s Winged Beatle video. They purport to be, although to be fair to the phoney fella I don’t believe he has ever substantiated this claim, from Mal Evan’s manuscript ‘Living the Beatles Legend’. 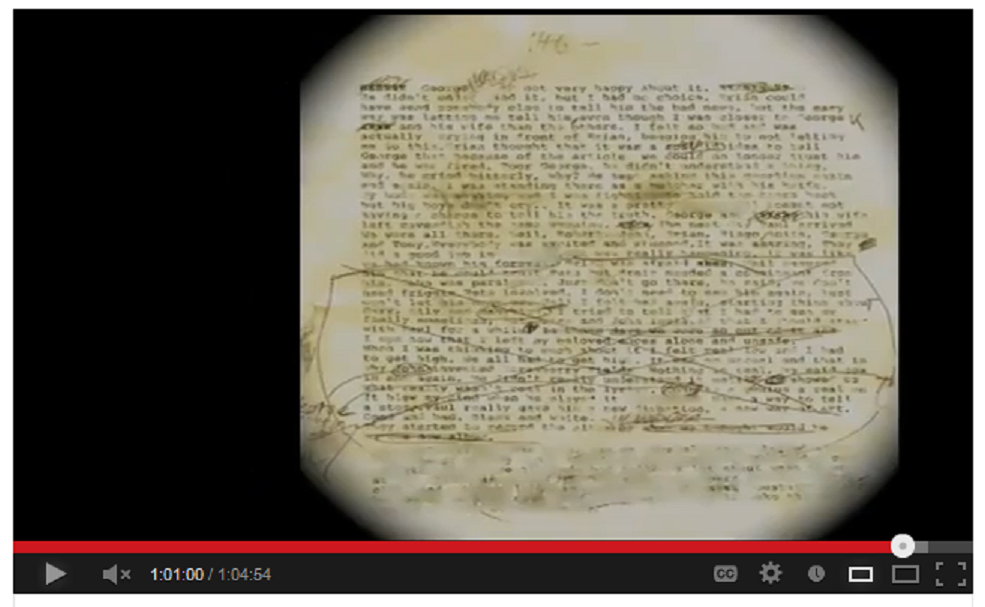 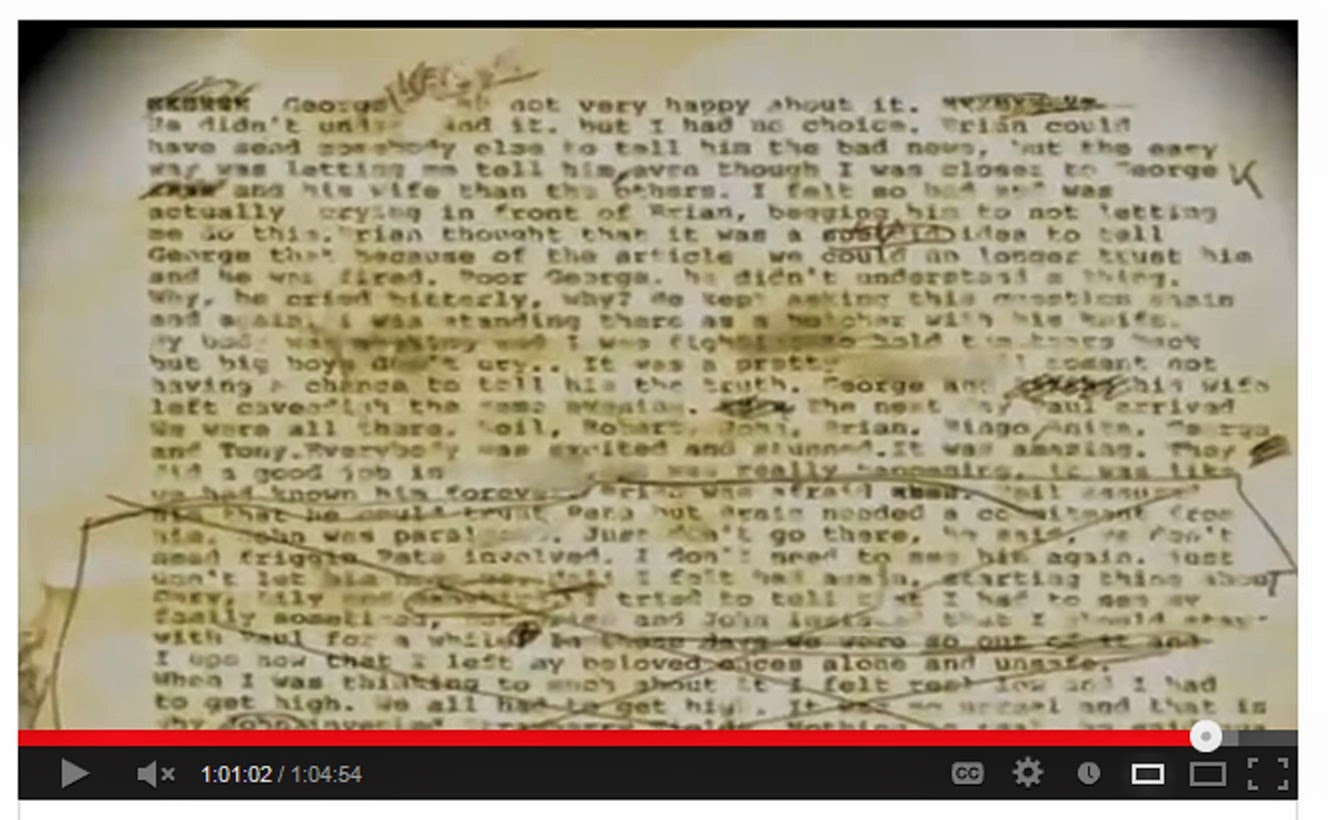 Their import, if we assume they are genuine and that it is quite a stretch, lies primarily in the references to the ‘good job in Nairobi’ and the ‘It was like we had known him forever’ line. But really it does not say much more. Why would Evans be so obtuse? If he is planning on revealing details of Paul McCartney’s death and replacement – which would be absolute dynamite and guarantee him a bestseller – why mention it in such an off-hand manner? Why not just say this when the new Paul appears and meets the guys?

On the other hand if that is not his plan why allude to it all?

As an aide to a re-appraisal I have reproduced the content below, verbatim including typos, as best I can.


Why, he cried bitterly, why? he kept asking this question again and again. I was standing there as a butcher with his knife.


My body was shaking and I was fighting to hold the tears back but big boys don't cry. It was a pretty [word blanked] moment not having a chance to tell him the truth. George and xxxx his wife left cavendish the same evening. The next day Paul arrived. We were all there. Neil, Robert, John, Brian, Ringo, Anita, George and Tony. Everybody was excited and stunned. It was amazing. They did a good job in Nairobi. It was really happening. It was like we had known him forever. Brian was afraid xxxxx. Neil assured him that we could trust Pete (Shotton? Best?, Blake? Asher?) but Brain needed a commitment from him. John was paralysed(?) Just don't go there, he said, we don't need friggin Pete involved. I don't need to see him again. Just don't let him near us, Mal. I felt bad again, starting thin[king?] about Gary, Lily and babybird. I tried to tell that I had to see my family sometimes, but Brian and John insisted that I should stay with Paul for a while. In those days we were so out of it and I see now that I left my beloved onces alone and unsafe. When I was thinking to much about it I felt real low and I had to get high. We all had to get high. It was no unreal and that is why John invented Strawberry Fields, Nothing is real. he said again and again. We didn't really understand it until he showed us what wasn't real in the lyrics. John is a genius a real on[e]. It blew my mind when he played it backwards? What a way to tell a story. Paul really gave him a new direction?, a new way of art. Good and bad. Black and white.


They started to record the album in December, or what we thought would be the new album.


It sounded right, the song, and we were all very pl[eased?]....the idea of making a new sound on the album. Pau[l came?] up with an idea we allready had talked a lot about [when we were?] at the clinic in Kenya. The sergeant peppers lon[ely hearts] club band. We were playing around with xxxx mou[stache.....] he needed to have some kind of thing that could tak...?

So, what can we deduce? Well we start with the sacking of George Kelly for permitting, according to Bill Harry, an Australian magazine to write an article about their life at Cavendish Avenue. And here’s problem number one. We are meant to assume that the time frame for this is November 1966 – immediately upon arrival back from Kenya – however, according to BillHarry the Kelly’s got the tin tack in January 1967. If anyone has any definitive evidence of this please let me know.

The Kelly’s were replaced by the Mill’s but, as an interesting aside, Paul also acquired a new cleaner around this time, Kathleen Smith. Mrs Smith had a son called Stuart Goddard who would later grow-up, have a nervous breakdown, declare that Stuart Goddard was dead and decide that he was now, and forever more, Adam Ant. Had he been Tavistocked I wonder? They like a good alter. Adam would also recruit Pepper star Diana Dors to appear in his Prince Charming video as a fairy godmother who transforms Adam from Cinderella to Prince. Now Diana liked a good video, particularly featuring mirrors, and what do we find - other than the video featuring a ballroom with a Masonic Temple black and white check floor - but Stuart’s replacement Adam smashing a (two-way?) mirror – Monarch symbolism again – from whence he is transformed into numerous alter-egos including Lawrence of Arabia, another Pepper cover star.

Enough pointless deviations though. Once Mal has been dispatched to do the dirty work for the gutless McCartney and Epstein we read of the arrival of an assembled throng, keen no doubt to meet the new and improved McCartney. We were all there. Neil, Robert, John, Brian, Ringo, Anita, George and Tony. Says Mal.

So just who are the assembled cast? Well Ringo, George and John we can safely assume to be Starr, Harrison and Lennon, Neil must be the phoney financer and PID creationist Aspinall, Tony I guess is Beatle publicist Tony Bramwell and Robert I believe is Robert Fraser. It is certainly Robert Fraser in the photo below from this time frame with the moustachioed Macca at Cavendish Avenue. 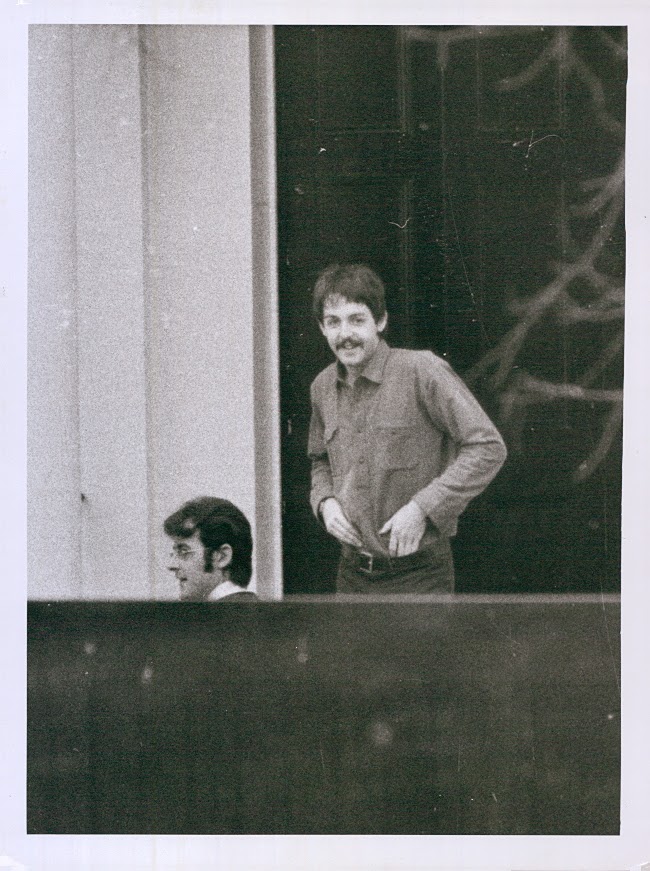 That just leaves Brian and Anita. Certainly the assumption would be that Brian is Epstein but, if that is the case, then who the hell is Anita? My best guess is that it is Anita Pallenberg, meaning, therefore, that Brian may be Brian Jones. They were together, and in London, in November 1966; the Stones were recording the Between the Buttons LP, and Brian and Anita posed for a Vogue photo-shoot with Pepper photographer Michael Cooper in that month.

But then, of course, that would change the whole essence of the document. The next lines read… Everybody was excited and stunned. It was amazing. They did a good job in Nairobi. It was really happening. It was like we had known him forever. Brian was afraid xxxxx. Neil assured him that we could trust Pete but Brain needed a commitment from him. John was paralysed(?) Just don't go there, he said, we don't need friggin Pete involved. I don't need to see him again. Just don't let him near us, Mal.

Just who is Pete? Best? Shotton? Blake? Asher? Pete Best would be the best fit but why would Brian – be it Epstein or Jones – need a commitment from him?

It may be advisable to remember that the original concept for Pepper was that the Lonely Hearts Club Band would be a replacement band for the no-longer touring Beatles. Could it be that they were actually trying to create an alternate Beatles? One that featured Pete Best and Brian Jones? Extremely unlikely I do admit but any less unlikely than Paul dies, a cover-up ensues, a replacement is found, plastic surgery is completed and said replacement is inserted into the biggest band in the world in the space of a couple of months and nobody notices?


Let us examine those time frames again; the story goes that Paul died on either; September 11, 1966 or November 9, 1966 and is based largely on the fact that due to the band deciding to no longer tour and John Lennon agreeing to go to Spain to film ‘How I Won the War’ that the Beatles disappeared off radar for a while. So, what do we know of their movements?

15 October 1966 - International Times Launch at the Roundhouse - Paul attends dressed as an Arab - Yoko is in attendance, which is interesting given that she had never heard of the Beatles??

So, whilst relatively little is known and photographs from this period are sparse, there is precious little time for a new Paul to be bedded in.

Perhaps the real key to the ‘Phoney Document’ is contained here… It blew my mind when he played it backwards? What a way to tell a story. Paul really gave him a new direction?, a new way of art. Good and bad. Black and white.

Perhaps this is the story of the meeting in which the Beatles cooked up the finer points of the Paul is Dead HOAX, complete with backwards messages contained within Strawberry Fields Forever. The Sgt. Pepper concept is the Paul is Dead concept because, remember, Nothing Is Real!!