A plea to the Phoney fella


I am going to make a request of the Iamaphoney.org.

In MikeNL’s excellent recent video Billy and Me (Now, sadly, removed from YouTube), Billy Martin states that early copies of the Beatles Anthology 2 album were pulped because Paul McCartney got cold feet about the inclusion of a track entitled either It Was a Fake Moustache or SPLHCB (Reprise) / Apple Star.

The following is a transcript of the conversation from the Billy and Me video:

Billy Martin: You know that story about him burning all those records?

MikeNL: Yeah, from the Anthology.

Billy Martin: Yeah. Have you checked out that it’s actually real?

MikeNL: I cannot find out anything about this.


And, ha! We’re talking about millions of records.


And if you can get hold of one of those first editions, that was supposed to be burned, not all of them, of course, then you will find out that there’s actually a song on which is called “It Was A Fake Moustache”.


That was when the world was closest to actually finding out.

There are various implications that can be gleaned from this:

1. That Billy Martin and Sir Paul have enjoyed a long-running musical partnership that dates back to Anthology at least. This may also add some validity to the claim that the mysterious 0rg – the zero is intentional apparently – has existed since 1990.

2. That even if this predates the iamapahoney.org the motivation to produce entirely backwards versions of Beatles tracks, and therefore to validate the Crowleyesque mantra of doing things backwards, that would manifest itself fully with Gnik Nus on the Love album, was actually extant from Anthology.

3. That Anthology was to include a new – if backward – Beatle recording outside of ‘Free as a bird’ and ‘Real love’ which, of course, were fashioned from rough demo tapes that John Lennon had recorded many years after the Beatles split.

Well, I would like the erstwhile Mr Martin to provide some proof positive of this claim in order to establish a valid connection between the Iamaphoney.org and McCartney.

My own forays into researching this field have thus far failed to yield any evidence of this reputed track and, quite frankly, that is strange.

Firstly, if true then this rarity would have caused quite a buzz amongst the collectors of rare vinyl; sadly though, I can find no evidence for this. I even consulted the Record Collector, rare record price guide 2014, but, mysteriously, I drew a blank.

Secondly, and of much more import, is the fact that the inclusion of a new track on Anthology would surely have sent the already stratospheric sales of Anthology spiralling heaven bound whilst simultaneously melting the internet and causing your average music journalist to self-combust in an orgasmic explosion of exquisite anticipation.

Sadly none of this ever happened and God knows Sir Paul is not slow to miss a marketing opportunity!

Anyway, I began my investigation by tracking down the promotional material that was circulated prior to Anthology 2’s release. My thinking being that as, by its very nature, these promotional devices – press releases, memorabilia, advance copies etc – are distributed to media outlets prior to release there may still a trace of the existence of this track. So, Ebay, Amazon and rare record sites were consulted, PayPal debits were authorised and promotional purchases were made in the noble pursuit of research; however, still nothing.

I returned to the Billy and Me video in the hope of a new lead. There I managed to extract a screenshot that tells an interesting story;
Now I do not know from where this document originates but the story it tells is at least verifiable; to an extent.

I have managed to acquire inlays for both the pre-pulped CD, and cassette, issues of Anthology 2, scans of which appear below with I'm Down as track 6.

Both confirm this change of track-listing. Apparently this all had something to with no Beatles album ever having had three songs in a row sung by one member. Originally, Anthology 2 had Real Love, Yes It Is and You've Got To Hide Your Love Away in succession. Paul, accordingly, demanded I'm Down be placed third.


So, whilst Billy Martin’s story has an element of truth to it, there is still no mention of the mysterious fake moustache tune.

So I looked at the promotional press releases I had purchased. The earliest of these – dated February 5, 1996 – pre-dates the Billy and Me screenshot above. It also contains the complete track-listing, a track-listing with I’m Down in its amended position of track number three but, no mention of fake moustache. 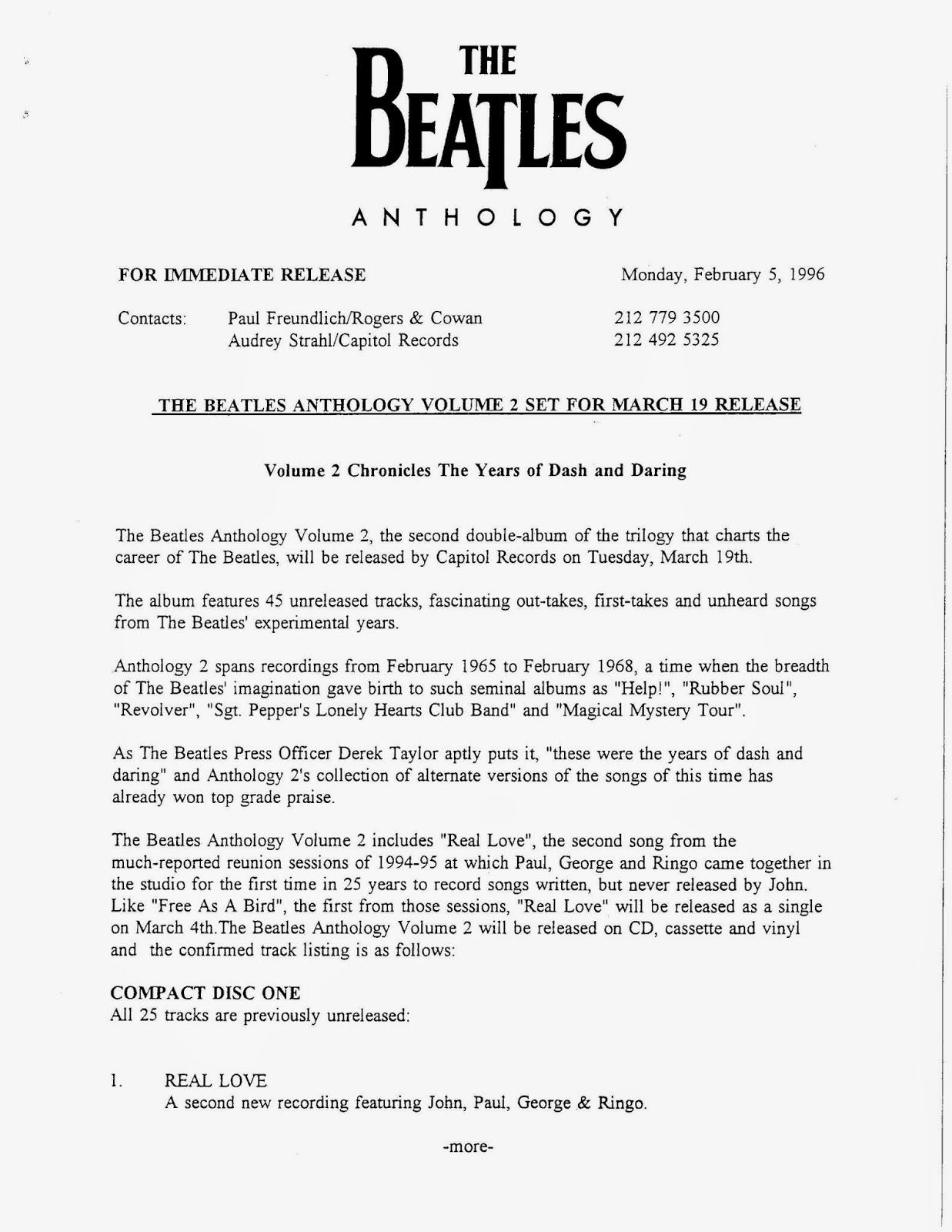 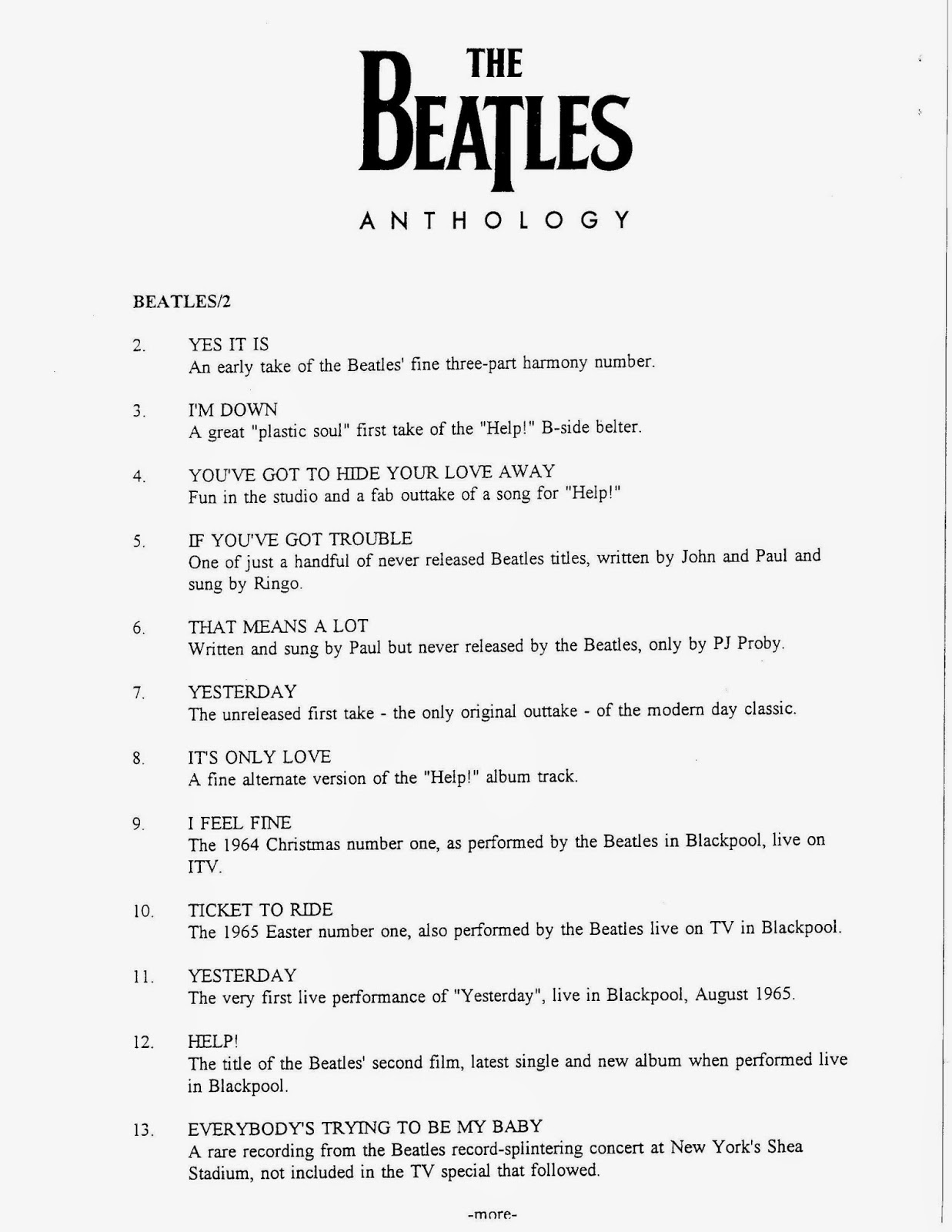 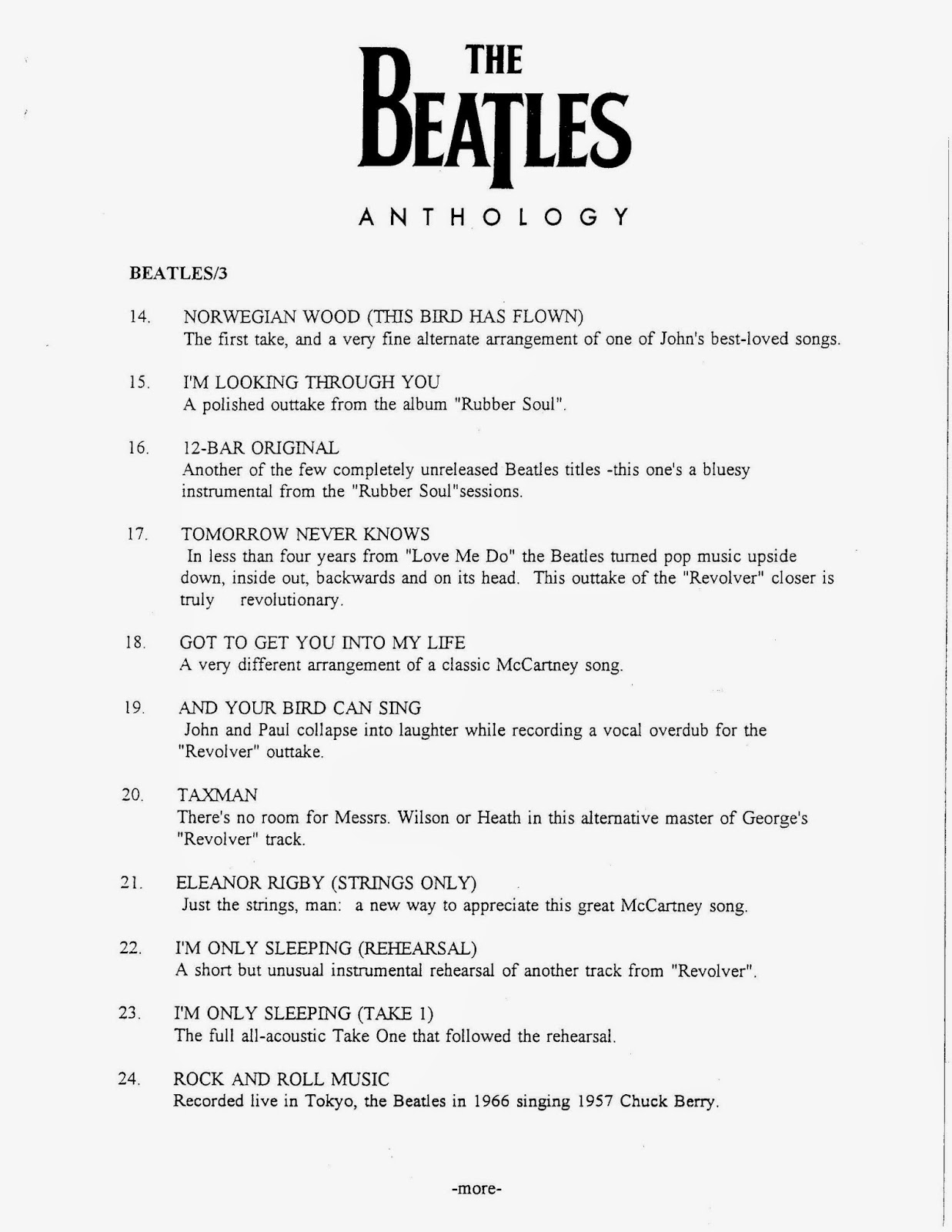 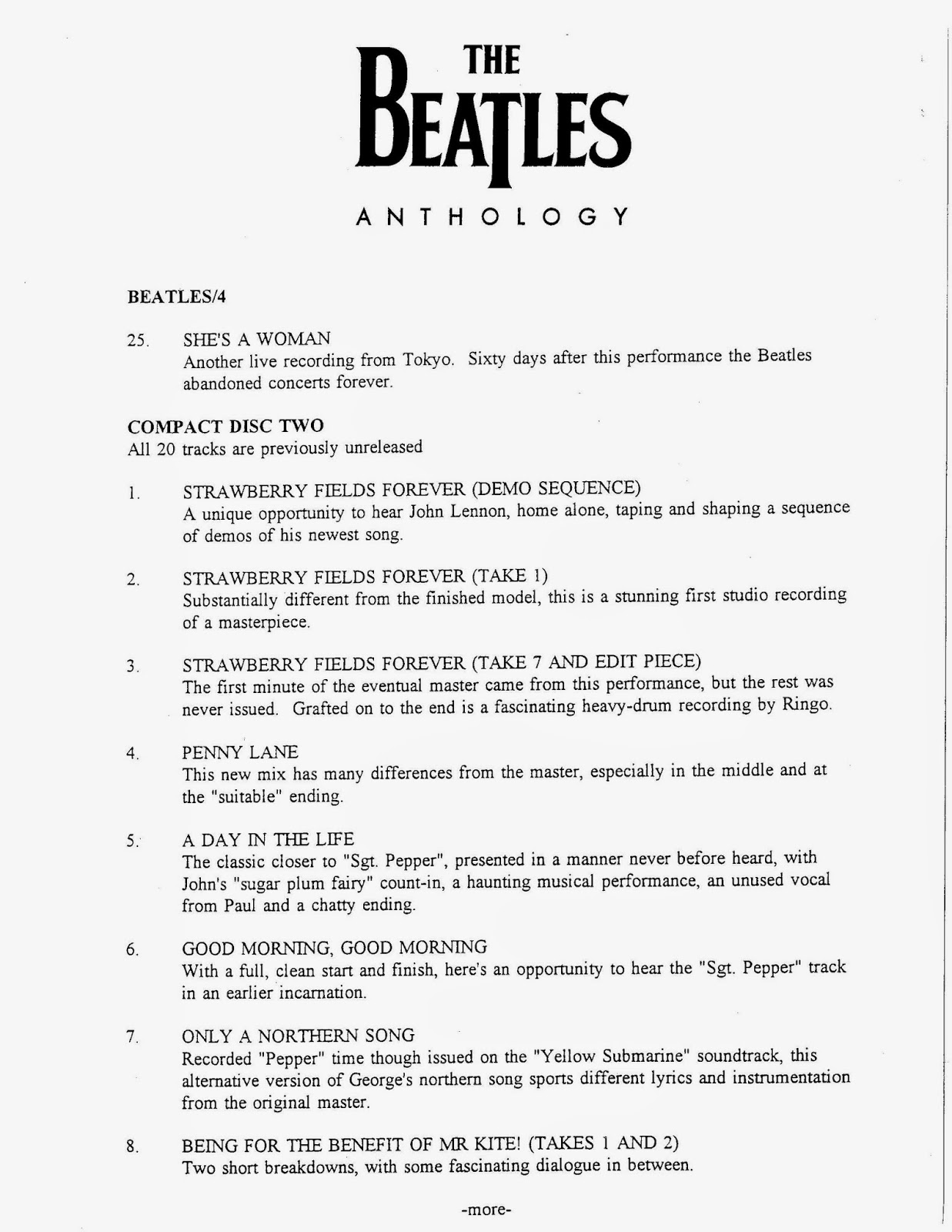 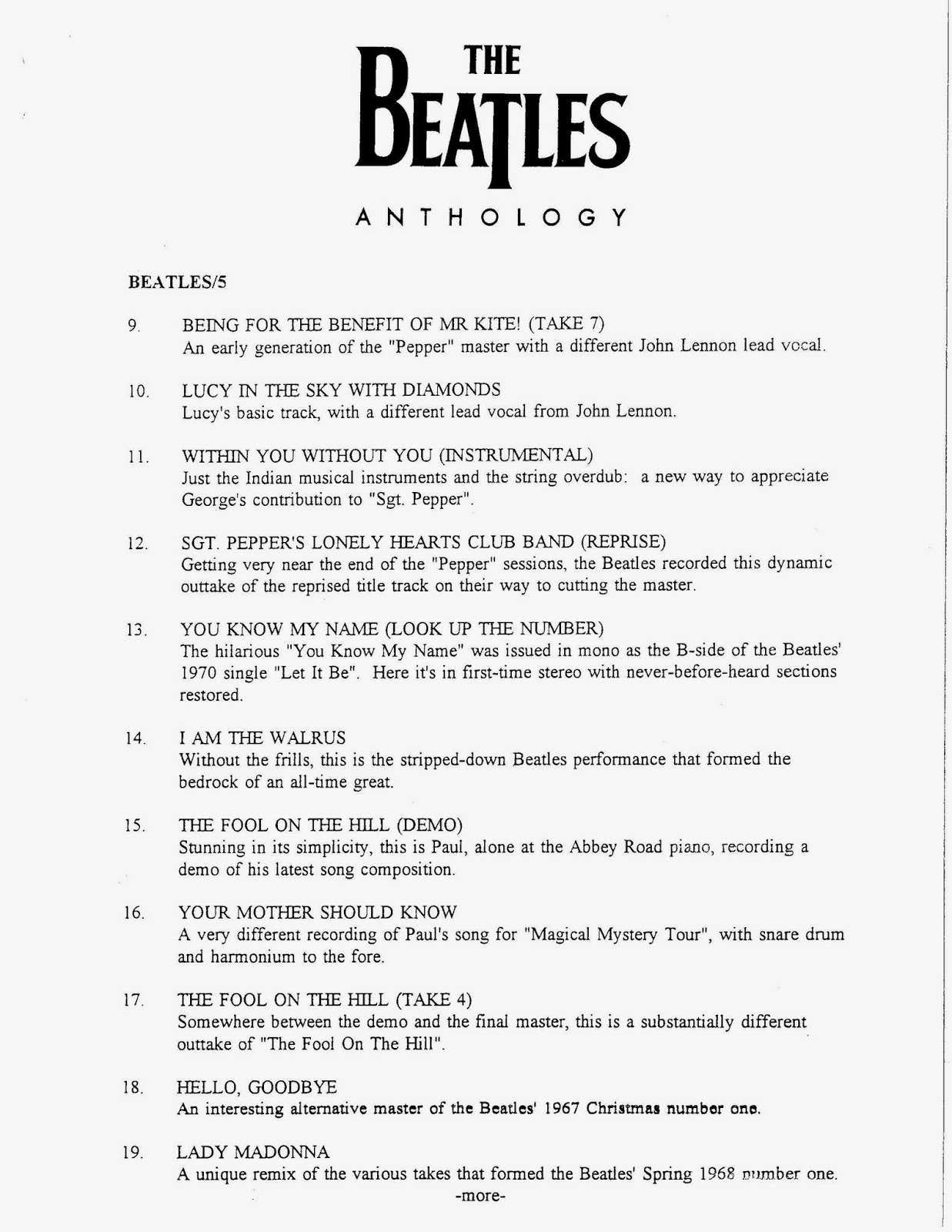 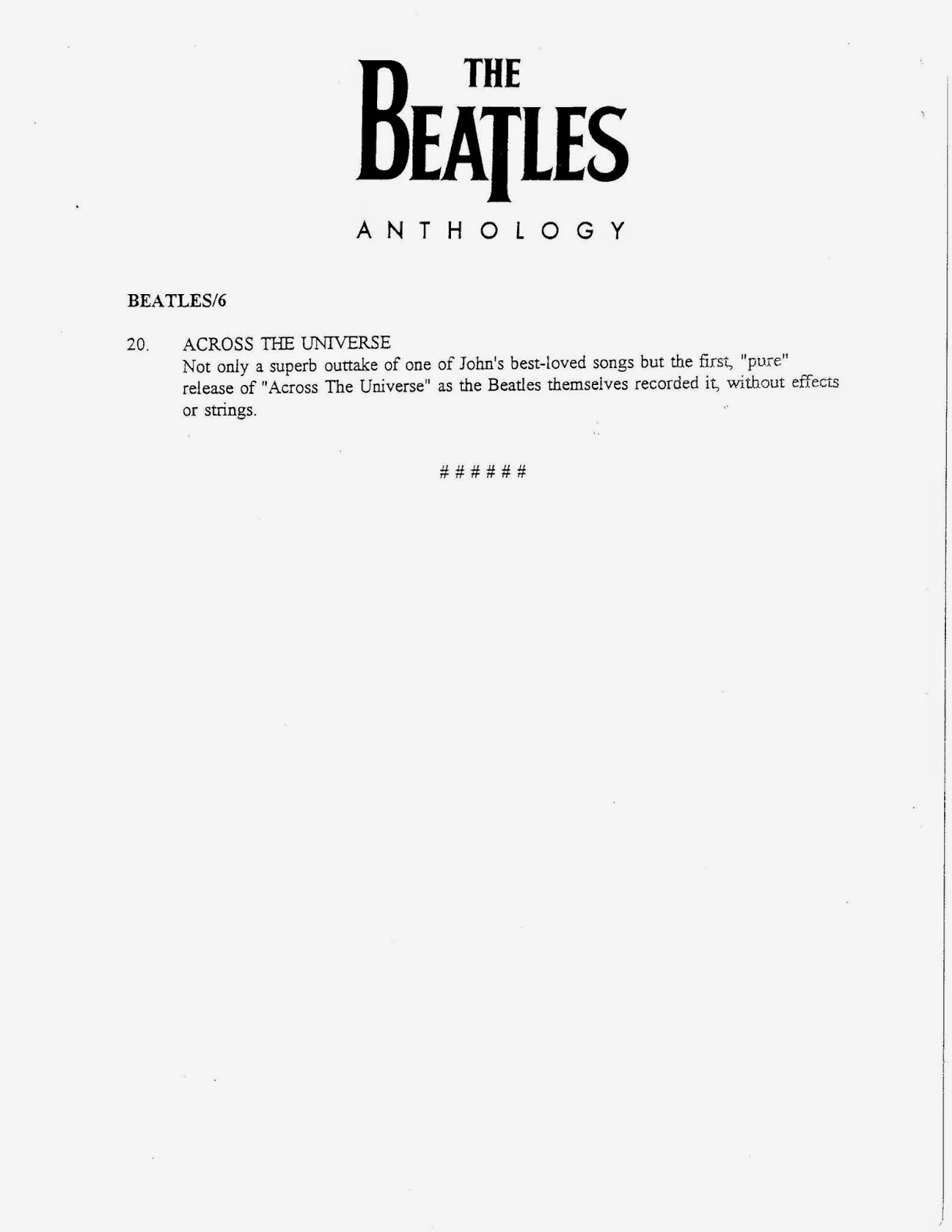 So, where there two, very expensive, pre-release pulpings of Anthology 2? Billy and Me promotes that possibility.

This screenshot – if of a genuine record cover – shows a track-listing with a track entitled Splhcb (Reprise) / Apple Star (but strangely not It Was A Fake Moustache) on Disc 2 track 12. Initially I must confess that I thought this was just a neat bit of photo-shoppery, however, if one looks at what can been seen of the track-listing for Disc 1 we can see that track 3 is Yes It Is whilst track 2 appears to be I’m Down. An unnecessary piece of additional tampering, I would venture, if fake.

So, my challenge to the mighty org is simple, provide some cast iron evidence that this claim is true. Maybe the time is now right for another suitcase containing the twin Anthologies?

London is nice at this time of year and given a suitable tip-off I could ensure its safe and rapid collection!


But seriously anything would do, otherwise we must be left to conclude that this is phoney information.

UPDATE: After first publishing this piece I received a facebook comment from M Maximus McPhoonie (not his real name I would suggest!) saying; "The difference between AppleStar and Gniknus is that AppleStar actually was recorded that way and, by mistake, added to the 12th track on Anthology 2 Simply because They, as a joke, spliced it together when having fun in the studio in april 1967. That tape was found by the technician and, only god knows how, it was added ." 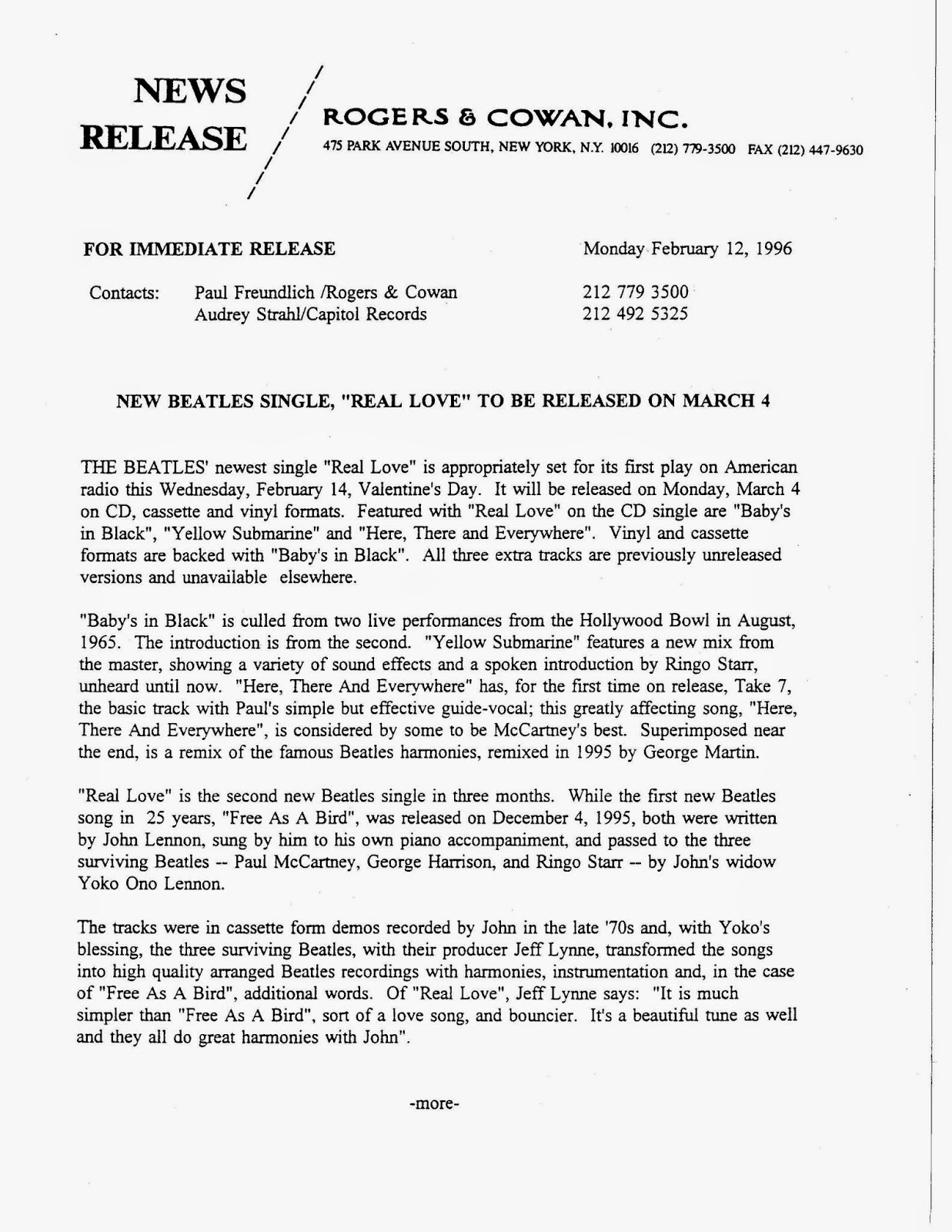 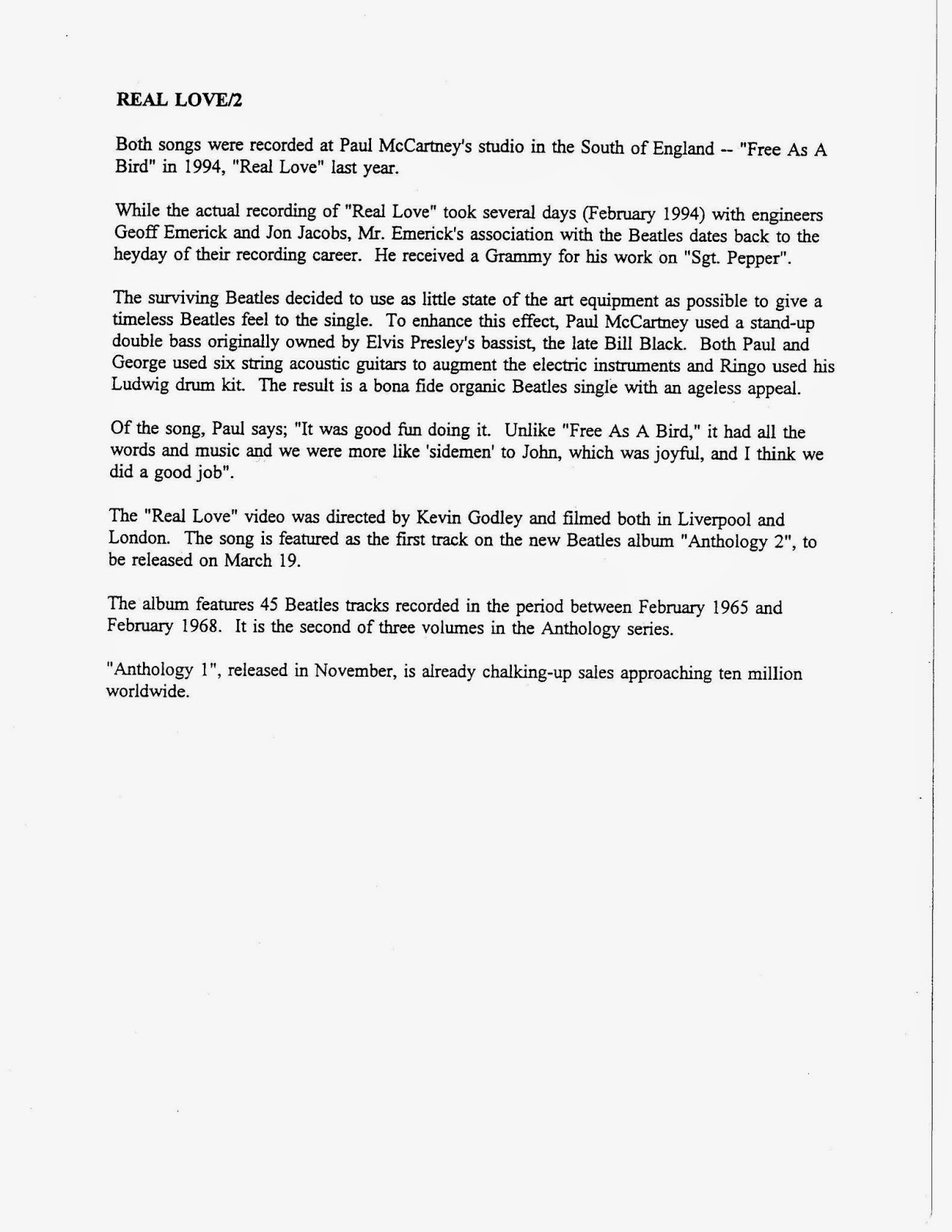