I have recently stumbled across some information pertaining to the jumper that is worn by the 'Shirley Temple' doll on the Sgt. Pepper sleeve that is contradictory to the Peter Blake version that I quote in 'The Sgt Pepper Code'.

Blakes version of events is as follows: -


“I worked in Michael Cooper’s studio for a fortnight constructing the set, fixing the top row to the back wall and putting the next about six inches in front and so on, so that we got a tiered effect. Then we put in the palm tree and the other little objects. I wanted to have the waxworks of the Beatles because I thought they might be looking at Sgt Pepper's band too. The boy who delivered the floral display asked if he could contribute by making a guitar out of hyacinths, and the little girl
wearing the 'WMCA Welcome the Rolling Stones, Good Guys' sweatshirt was a cloth figure of Shirley Temple, the shirt coming from Michael Cooper's young son Adam".

However, the article from the August 1966 copy of 'Hit Parader' magazine is somewhat different. 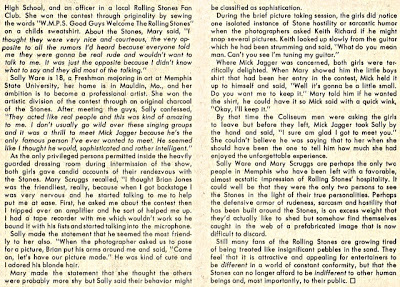 So, it would appear that the sweatshirt says,
'WMPS' and not 'WMCA', despite what practically every source, including my own book, says, and that it must have been given to The Beatles by Jagger himself and therefore, did not come from Pepper sleeve photographer Michal Cooper's son, Adam.

Of course Cooper, and the Stones, would return the favour of the cross brand advertising when they realeased their next long player, 'Their Satanic Majesties Request', by including concealed images of the Fab four on their mega expensive new record sleeve.

What story is the correct one? Who knows, however, it proves yet again that when dealing with stories concerning the Sgt. Pepper sleeve you just never know what is real and what is bogus. I mean, they way they carry on you would think they were hiding some hidden secret or something? 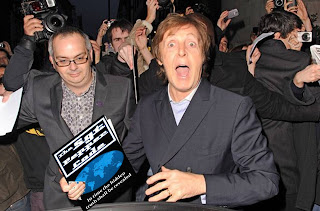