It is a truism that when you start looking for something you tend to find it; however, the more one looks at the Sgt. Pepper cover the more one does indeed find. Thankfully, it is not just me that finds a series of strange coincidences, happenstances, synchronicities and codes embedded within the most iconic record sleeve of all time.

Despite not having produced a video in many years my old YouTube channel suddenly started receiving a number of interesting, and cryptic, comments pertaining to Pepper, and it is these comments that were the inspiration for this, and hopefully future, articles.

It is always wonderful when somebody takes the time to read and comment on one’s work, even more life-affirming though when they pick up the threads and start looking for their own answers to the questions posed. Fresh eyes always see things differently and identify new areas for investigation and these comments – literally a deluge in this case – pose a whole new set of questions. Not least of these being; when exactly did the planning for Pepper begin and is it an example of predictive programming?

Here is one of the original comments: AH! LOOK AT ALL THE "LONELY" PEOPLE! (AH = 1+8 = 9) Was "Eleanor Rigby", from August 1966, (ten months BEFORE "Sgt Pepper") setting us up for a record and cover that had already been prepared? Was Paul giving us an instruction to look at the LONELY (hearts club) people a year before we first saw them gathered together? An anagram of "Ah, look at all the lonely people" is: ALLEN POE, LEO, HALL: LOOK AT THE "YP". Poe, Leo Gorcey (later removed) and, next to him, Huntz Hall all appear on the back row of the Sgt Pepper crowd, aligned. If you draw a line on the Pepper sleeve drum skin that takes you from the "Y" to the "P" (the one that sits directly below the dead centre of the cover, which has been cited before by Redwel), and then beyond, it takes you to.... KARL MARX / HG WELLS Again! When Poe, Hall, the "Y" and the "P" are connected, it creates a perfect, inverted right-angle triangle. That means that there are possiblyTHREE markers on Sgt Pepper alone that take us to Marx/Wells point, as well as those later on "Maxwells Silver Hammer". Behind the scenes, is it possible that the team that assembled and steered The Beatles were working at least a year ahead of schedule?﻿

Which is, I am sure you will agree, a staggering possibility, but is it one that can be validated in any meaningful way?

Some time ago I wrote about the fact that if you overlay a compass over the Sgt. Pepper cover, then, at exactly 33°, you will find both Karl Marx and H.G. Wells, who were both 33° Freemasons. Now, via Karl Townam’s anagram of ‘Ah, look at all the lonely people’ we can discover another encoded reference to Marx Wells.

If you extend this compass line slightly, down through the Pepper drum-skin, through the ‘P’ and ‘Y’ of Lonely Hearts we can create an axis for Karl’s right-sided triangle that is completed through the anagrammatic list of cast members – Allen Poe, Leo (Gorcey) and (Huntz) Hall. 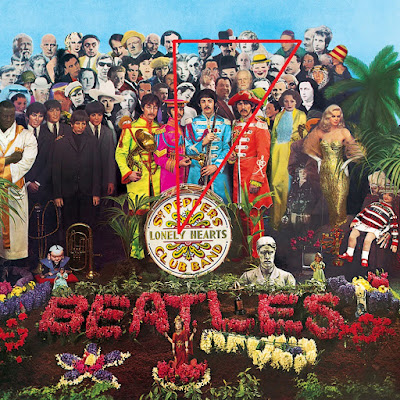 Also, if we look again at the extended 33° line we see that it goes through both ALBERT Stubbins and Huntz HALL – ‘Now They Know How Many holes it takes to fill the ALBERT HALL’. A line, of course, from ‘A Day in the Life’.

Karl further suggests that there may be a further link with Marx Wells via the, almost, punning title of ‘Maxwell’s Silver Hammer’ (Marx / Wells Silver Hammer) from the Abbey Road LP. The lyrics to this song mention PC 31; Character 31 from the list of the Pepperati is, of course, Karl Marx. So, is PC 31 Karl Marx?

Now, if we draw a line from Wells down to the Shirley TEMPLE doll, we find it goes through a bloodied glove! 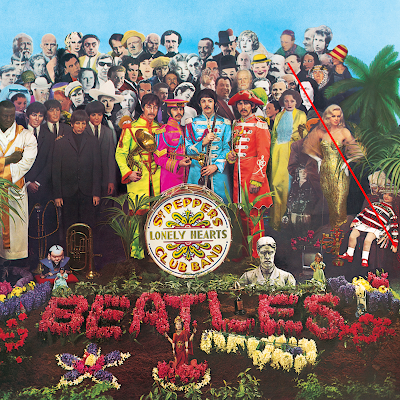 Our friend Karl suggests one more clue that could tie Sgt. Pepper and Abbey Road together. He suggests that an anagram of ‘Polythene Pam’ is ‘Open the Map YL’. So, if you draw a line from the "Y" and either of the "L’s" on the centre of the drum skin it follows the same 33° line again, to Marx/Wells. 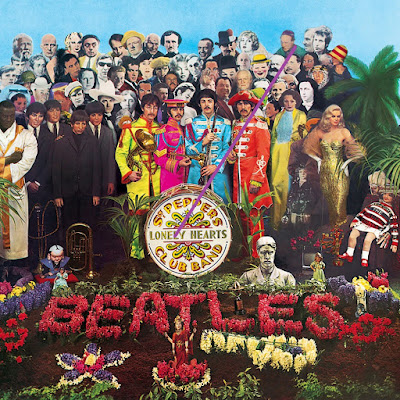 I have long contended that the Sgt. Pepper cover is a treasure map, but is it really? Well, we shall return to the map thing henceforth, but, in the meantime, Karl tells me he will be publishing his own blog entitled It's Getting Very Near the End shortly, that will reveal more of his exciting discoveries and he is tweeting prolifically @PredictiveBeat