Waxing lyrical: a brief consideration of the waxwork Beatles on Sgt. Pepper.


I was recently pondering the inclusion of the waxwork Beatles upon the Sgt. Pepper cover and so I embarked upon a mini-Google-based research session. As with most things Beatlesque these sessions result in more questions than answers. 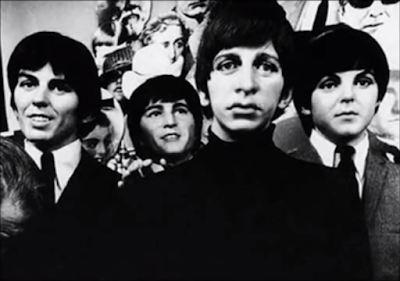 If we peruse the above image of the mop-topped mannequins, kindly loaned to Peter Blake for the photo-shoot by Madame Tussaud’s, we see a smiling John and George and a sad Paul and Ringo; and therein lay problem number one.

In this image we see the cross-legged fabs and their original wax replicas in 1964. 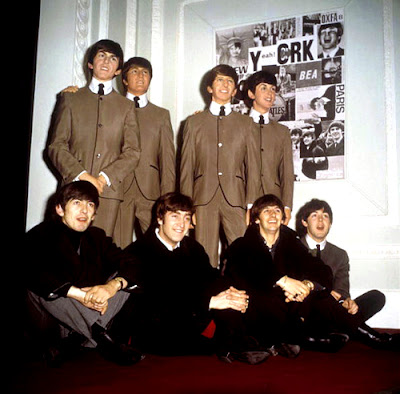 As befitted their status at that time of being the undisputed champions of teenage idolatry we see not only smiley John and George, but also smiley Paul and Ringo.

Fast forward three years to the Pepper shoot and two are smiling and two are not. At the risk of starting a whole new conspiracy, not only has Paul been replaced but so has RINGO!!

“The game’s afoot Watson”, I shouted, and like a demented Victorian sleuth I embarked upon a relentless quest for the truth in the adventure of the misplaced heads.

Clue number one led me to the website of the auctioneers Cooper Owen and  lot no: 273; whereby I discovered that the dismembered heads of the waxy marionettes had sold for £70,000 back in 2005. Furthermore, the blurb revealed that:

The waxworks were borrowed from Madame Tussauds who are credited on the back of the album for the shoot that took place at photographer Michael Cooper's studio on 30th March 1967.

Except, a quick squiz at this accompanying photo reveals a further anomaly. 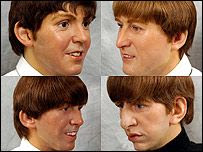 Smiley John, smiley George, sad Ringo and…something vaguely approximating Paul, but who, frankly, could be just about anyone. To be honest none of the latex doubles would pass the very good replica’s test, George looks more like Keef Richards to me, however, Paul’s severed cranium has been replaced…again!


The original wax heads of John, George and Ringo with cut-off shirts and ties, supplied by Madame Tussaud's to be used on what has to be the most iconic cover shot of all time the Sgt. Pepper album sleeve. Together with an original Paul head from the 1960s, which was not used on the cover but completes the fab-foursome.

Not true. The original Paul head came with the obligatory McCartney arched eyebrow, as seen here with the original James Paul himself. 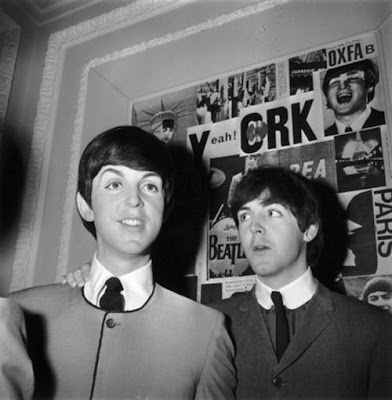 What exactly is going on here?

This image taken behind the scenes of the photo-shoot shows us the headless corpses of our Pepper dummies, well three of them anyway. 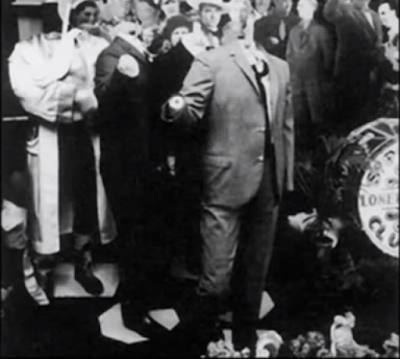 Why not use the original dummies complete with the collar-less Pierre Cardin suits?

According to Peter Blake:


'Paul and John said I should imagine that the band had just finished the concert, perhaps in a park. I then thought that we should have a crowd standing behind them, and this developed into the collage idea… I wanted to have the waxworks of the Beatles because I thought they might be looking at Sgt. Pepper's band too. The Tussaud's figures were a key part of Blake's interpretation of the concept: 'It was a comment on the fact that the record wasn't really by The Beatles but by Sgt. Pepper's Lonely Hearts Club Band, so The Beatles themselves were in the audience watching Sgt. Pepper's band…'

If that were truly the case surely you would use the most stereotypical image of the band going?


Why would you use two previously unknown versions of Paul and Ringo’s heads?

Perhaps, the answer harks back to a proto version of the band entitled Long John Silver and the Beetles?

One member of Long John Silver and the Beetles was Stuart Sutcliffe, before he was replaced, on bass, by Paul. Another member was Pete Best before he too was replaced by Ringo.

Perhaps that explains why the Paul and Ringo waxworks on the Sgt. Pepper cover are replacements? 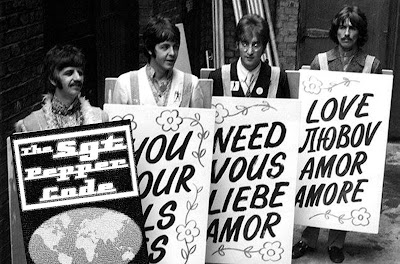