The Curious Affair of the Mad March Red Herring’s


Firstly, please allow me to apologise for the paucity of material of late, however, inspiration has been sparse in the extreme and, dear reader, what is an artist without his muse?

That said, how could I not be inspired by the events of the last week as it appears the game is now afoot Watson.

Firstly we had the story PIDers have been waiting years for, confirmation from Ringo that Paul did indeed die in 1966; http://worldnewsdailyreport.com/former-beatle-ringo-starr-claims-the-real-paul-mccartney-died-in-1966-and-was-replaced-by-look-alike/%C2%A0


Now, OMG if that doesn’t that put an almighty spanner in my theory that PID is total BS! But, hold on, @TEOTD maybe this is just 2G2BT so, how I LMAO when I discovered that the spoof story had already disappeared from the www.

Disappeared you say Holmes, but how could that possibly be so?

Well, click on the link above and see what comes up [Spoiler Alert: It’s an error message]. But, whilst there please have a quick look at the website’s disclaimer;

WNDR assumes however all responsibility for the satirical nature of its articles and for the fictional nature of their content. All characters appearing in the articles in this website – even those based on real people –  are entirely fictional and any resemblance between them and any persons, living, dead, or undead is purely a miracle.

So, my dear Watson it is all a load of old bollocks my friend.


However, not slow to cash in on the success of their ruse, the good people at New World Order Media then came up with this follow-up; http://worldnewsdailyreport.com/paul-mccartney-refutes-ringo-starrs-allegations-that-he-died-in-1966-3/


Now, whilst pretty much the entire story is contained within the link heading, for those of you keen to check the accuracy of my diligent sleuthing I would suggest clicking that link pretty darn quick, as one fears it won’t be alive long.

Unlike, of course, the erstwhile Sir Paul McCartney who will be in attendance next month when his dear ‘senile’ old pal, Ringo Starr, is initiated into the Rock and Roll Hall of Fame.

That said, far be it for me to disparage the claim of Frau Hübers whose poor old Mutter may well have been goosed by a randy Scouser, or two, back in the day. Good luck to her and her money grabbing embezzlement schemes I say.

However, whilst the story may have got Facebook's plastic propagandist’s in a tizzy and, simultaneously, moistened the panties of many an ardent PIDer, it is, total and utter bullshit. One wonders then why the two wealthy and ennobled individuals who are being slandered therein have, apparently, let it go without legal recourse.

Perhaps they believe in that ancient Barnum maxim that ‘all publicity is good publicity’? Well, PID is certainly a circus and Mr Starr does have a record to sell so, who knows?

Which brings us to Michael Herring – a fishy name if ever I heard one – who also has some Beatle related tat, sorry, product to sell; http://www.dailymail.co.uk/news/article-2984386/PICTURE-EXCLUSIVE-Never-seen-images-Beatles-1968-George-Harrison-carrying-Paul-McCartney-s-resignation-letter-shirt-pocket.html


He aims to boost the clamour for his never-seen-before photos by claiming that the convenient scrap of paper popping out of George Harrison’s top pocket is, in actual fact, Paul McCartney’s letter of resignation from the Beatles, despite no evidence for the existence of this letter ever having made it into the realm of the public domain. 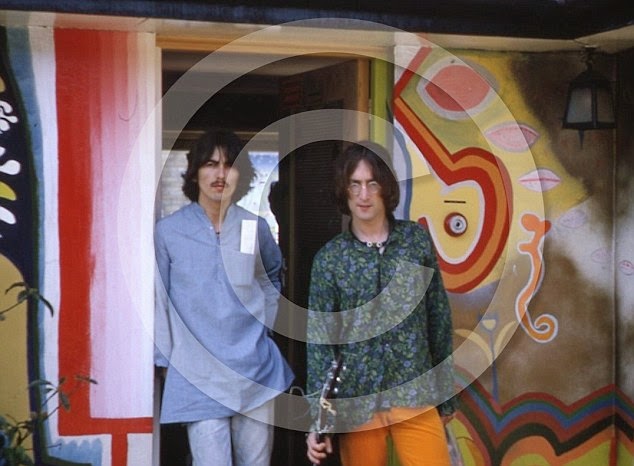 Conveniently for Mr Herring the two people in the photograph who could corroborate his claim are now dead (actually dead, not fake dead) and Paulie, or is that Faulie, is keeping shtum on the matter.

Now, once again, far be it from me to say that this is just an ingenious way of extracting a few extra noughts from a mug-punter at the auction, but the article, in that ever-reliable and never knowingly xenophobic mouthpiece the Daily Mail, does claim that; ‘There was a knock on the door. George opened it and there was a personal delivery guy (that would be the Postman then?). He handed him this pale blue letter. George read it and passed it to John.’

Pale blue letter? Call me colour-blind but whatever that object is that is protruding from George’s shirt pocket looks pretty damn white to me. Whatever. Now if I had a time-machine and I could travel back to 1968 I would have to advise Paul, or is that Faul, to never trust a legal firm that uses pale blue stationery. Not only will it look like plain old white in any subsequent photographs but its recepients will simply ignore it with bugger all consequences ensuing.

It may be pertinent to note that rather than spend their time worrying about the cute one's impending departure, the band simply got on and wrote a song - Revolution No. 9 - with backwards lyrics that may, or may not, say 'turn me on, deadman'. Which is, even by the far-out standards of the swinging sixties, a pretty weird request!

So, whilst there seems to be little, actual, evidence that Paul, or is that Faul, was looking to quit the band in May 1968, the question must be asked, if Paul was replaced, by Faul, in 1966 and handed on a silver-platter this wonderful world of fame, wealth, sex, drugs and influence then why did the ungrateful tosser look to pack it all in after a mere eighteen months?

I am reminded of an enigmatic quote by my favourite forum-poster, Apollo C. Vermouth (about whom more can be discovered here);

Greetings
…. Remember that show on the telly, "Bewitched"? The original actor playing Darrin passed away. They quickly replaced him with another actor, to keep the show intact. Now, the original Darrin needn't have died. Maybe, he just said "fook it" and headed for greener pastures. Went on holiday, so to speak. But, to keep the original premise in place, somebody had to assume the role.
Now imagine, if you will, that scenario in context to this "mystery." Only in this case, the original Darrin came back to the show, after his fancy of leaving proved to be not quite in his best interest. By then, the show was on the "outs", and the cast grew tired of each other, thus putting an end to the show. Now, each blamed the other for the demise, for whatever reason they could muster, and went their separate ways. It's kinda like that. Only different. I told ya I was disturbed.
Apollo

So once more we must ponder the undecipherable question at the heart of this enigma: is this some surreal attempt at manipulating reality to mess with our heads or, was there, in fact, a temporary McCartney replacement?

One man, or organisation, who may know is Iamaphoney, aka Billy Martin, who, not so coincidentally, appears to be emerging from his golden slumbers and issuing forth new(ish) material under a staggering array of pseudonyms.


I dare say there are many more identities to which I am not yet privy, though also back from the dead is Miles Denton Oliver (google him and iamaphoney) who sent me this charming comment to my YouTube account; 'how is it being a real wanna-be MilesDeo?  Stealing other peoples identity,Eh? It is uacceptable in all matters - It is NOT a legal thing to do. Please drop your account or I have important friends in positions you would only dream about, you phoney!  Please step back and let the real Miles Deo be back again!﻿

i am with iamaphoney'

He is with Iamaphoney you know, and, as confirmation he posted this:-


Now I am sure I haven't the slightest clue what he is on about but does the dear boy not know that imitation is the sincerest form of flattery!

Possibly the org, as they so quaintly like to be known, are just regurgitating old material under new monikers, but what, one wonders, has prompted this flurry of activity at exactly the same time that these false flag stories are released?

Perhaps this image from the phoney one’s website is telling? 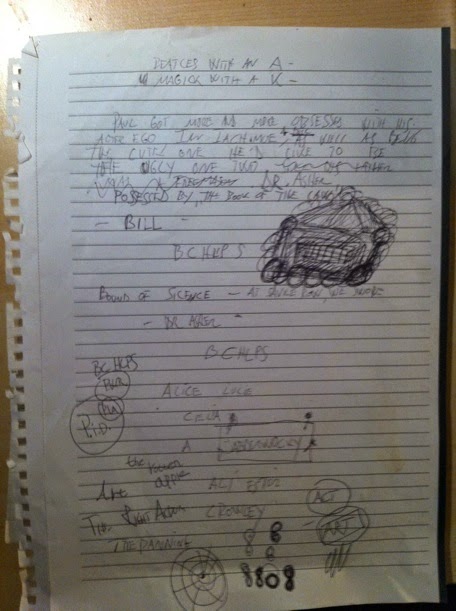 I am particularly intrigued by the handwritten note at the top that seems to read ‘Paul got more and more obsessed with his alter ego, Ian Iachimoe. As well as being the cute one he'd like to be the ugly one two. Like his father was a freemason. Dr Asher, possessed by the book of the law.’

I cannot be eaxctly sure that is what it says, my trusty magnifying glass is not sharp enough, but is it a possible plotline revealed? Who knows? Only the phoney Moriarty can be sure. Perhaps, Sir, you could let me know? You know who I am.