Recently posted on the Iamaphoney Facebook fan page: is the game afoot? Let us look in a little more detail at what was posted: 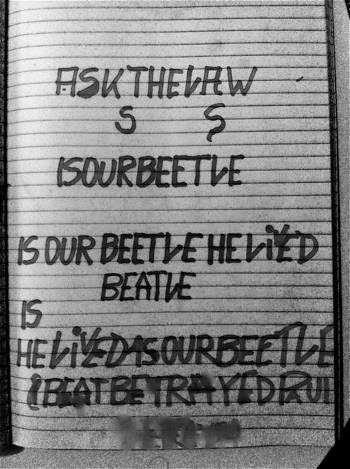 
is our beetle he lived


he lived is our beetle


Ok, so what to make of this? This is intended to be mirrored.


It therefore becomes ‘Book decide – He died’; presumably refers to the Book of the Law? 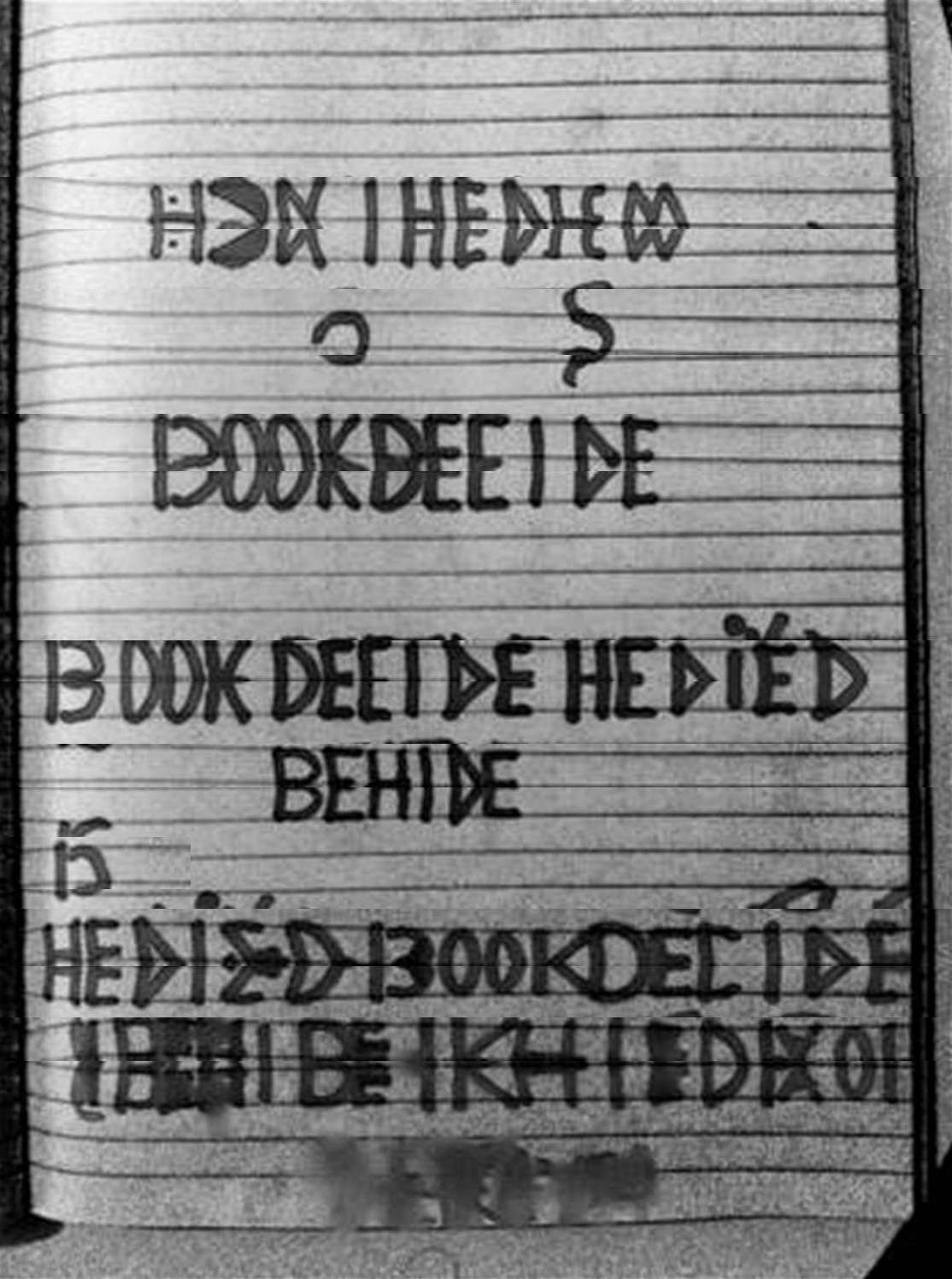 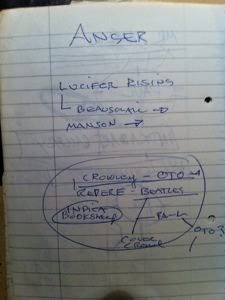 Can’t make out the rest apart from another mention of OTO.

The desire, I am guessing, is for us to investigate these characters. Well, Kenneth Anger is a film-maker – and avowed disciple of Aleister Crowley – who made a movie called Lucifer Rising which starred Bobby Beausoleil. At least the original version did, because Beausloeil went off into the clutches of Charlie Manson and his family and has been incarcerated ever since, though he did supply a musical score for the film. Manson is rumoured to have been involved with the Process Church of the Final Judgement who were modelled on the mind-control tenets of Scientology wich was set up by L Ron Hubbard after he attempted to produce a Crowleyite Moonchild in a ritual with Jack Parsons. Parsons was a member of the OTO who, at that time, were led by Aleister Crowley.

Revere and the Beatles I am guessing refers to Paul Revere and the Raiders and their member Mark Lindsay who was a McCartney look-a-like. Could well be wrong though?

Indica Bookshop was run by McCartney propagandist Barry Miles along with John Dunbar – who set up John Lennon with his handler Yoko – and McCartney mind-controller Peter Asher. Asher, incidentally, will shortly be introducing Brian Epstein when he is inducted into the Rock and Roll hall of fame. It is from the Indica Bookshop that the International Times was produced and sold, which was funded by Ian Iachimoe. 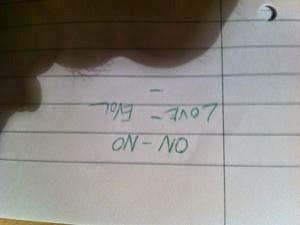 On Love – No Evol 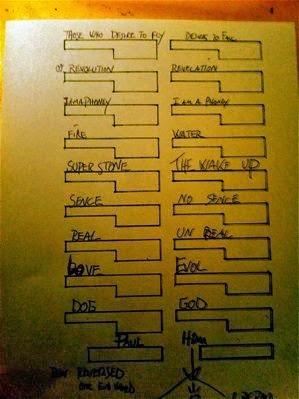 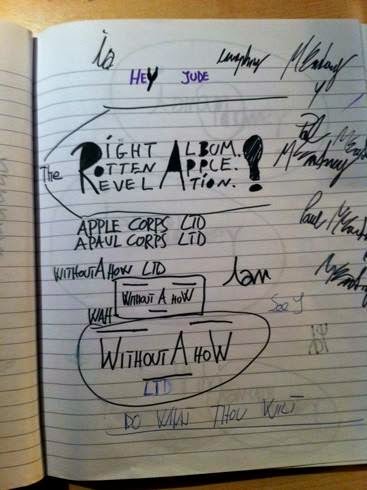 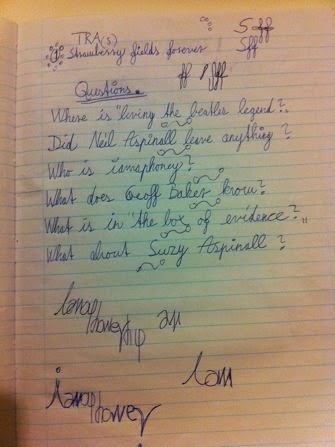 
Where is living the Beatles legend?


Did Neil Aspinall leave anything?


What does Geoff Baker know?


What is in the box of evidence?


What about Suzy Aspinall

One has to assume that these are rhetorical questions aimed at us discovering the answers as Iamaphoney would already know. So, what do we know?

Where is living the Beatles legend? – the ‘official’ answer is that the Mal Evans manuscripts are with his widow Lily Evans having laid in a box for years with Yoko at the Dakota, however, given that glimpses of the manuscripts show up in Iamaphoney’s work (specifically the ‘they did a good job in Nairobi’ segment) one has to assume our man has access. Could they have been left in a suitcase?

Did Neil Aspinall leave anything? – My guess is yes, specifically the archive of Beatle films, photo’s and memorabilia that McCartney asked Aspinall to construct in 1970. The purpose, initially, was to keep it out of Allan Klein’s hands but, ultimately, it became the Beatles Anthology. The rest, I assume, resides with Iamaphoney given the amount of unseen material he has been able to use in his videos without, it should be said, having had a copyright notice from Apple Corps slapped all over it.

Who is Iamaphoney? – Martin Heurlin, Hans Buchardt and Martin Lind – so far as I can tell.

What does Geoff Baker know? – Geoff Baker was McCartney’s press officer until Sir Paul sacked him unceremoniously. I guess he knows where a lot of the bodies are buried, including the Heather Mills box of evidence, but, here is his email address; geoffbaker12@btinternet.com ; somebody please ask him as I would love to know.

What is in the box of evidence? – Heather Mills’ box of evidence which reportedly contains taped evidence of Sir Paul admitting to having hit Linda. Heather claims that she took to recording dozens of her marital conversations - it’s good to know that love isn’t dead – and the revelations contained therein are now in the box. Whether this includes the answer to the PID conundrum is unclear but my guess is no. Interestingly a guy called Peter Cox sold Sir Paul a load of taped material he had when he was interviewing Linda McCartney for a book which also, supposedly, contained explosive material. Iamaphoney covered this in his ‘Linda tapes’ movie.

What about Suzy Aspinall? – Very good question. Suzy, wife of Neil, was the other partner in Standby Films – the Aspinall’s film production vehicle – which since being formed in 1970 has produced just the one film – about Jimi Hendrix. At the time of the companies dissolution in 2010 Suzy was the one remaining director and the company still had cash assets of over £170,000. I have speculated, often, that Standby Films was bankrolling Iamaphoney, however, he is yet to confirm.

Suzy is on Facebook where her friends include the aforementioned Geoff Baker and Shaun Weiss – son of Eppy’s mate Nat.

Apropos of nothing, Shaun posted this picture on Facebook once. 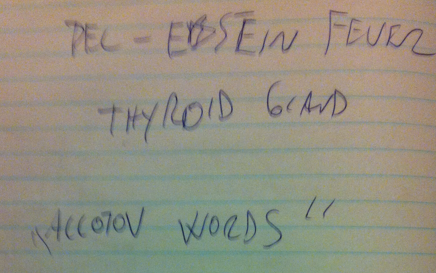 Bizarre, except that Pel-Ebstein fever was referred to by Richard Asher as an example of a condition that exists only because it has a name. 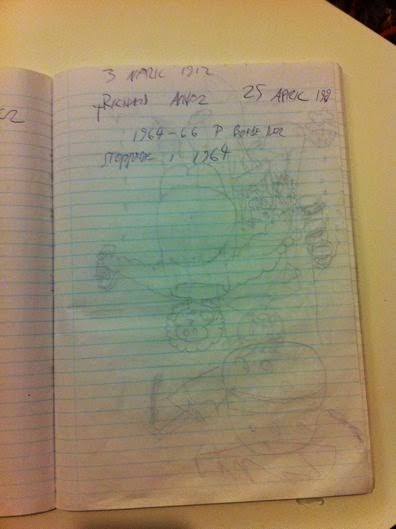 This is clearly designed to get people to investigate Asher, but, little is actually known about the man. However, he, like Epstein, reportedly committed suicide. I say reportedly as nobody is entirely sure. The story goes that his family thought he had left the house only for him to be discovered some time later hanging in the basement.

Also of note is that Dr Asher gave up all medical practice suddenly in 1964. The year McCartney moved in. 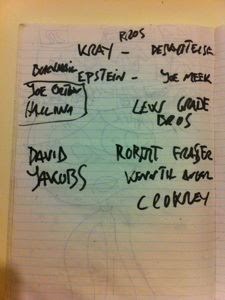 At first glance these are names that are all interlinked. The Krays were heavyweight gangsters who, reportedly, supplied boys to child sex rings for parties that, it has been alleged, were attended by Joe Meek and Brian Epstein. Epstein, Meek and Orton all died in 1967, Meek, in Islington, at his own hand after having blasted his landlady to death, Orton, in Islington, at the hands of his lover Kenneth Halliwell – who then took his own life with an overdose of sleeping pills –and Epstein, supposedly,  with an overdose of sleeping pills. David Jacobs was Brian Epstein’s lawyer who died after hanging himself reportedly after being threatened by the Krays. Lew Grade - and his brothers – Bernard Delfont and Leslie Grade, were the Winogradsky brothers, Polish immigrants, who essentially controlled the British entertainment industry in the ‘60’s. Indeed Lew owned ATV which controlled a considerable interest in the Beatles back catalogue. Robert Fraser – who was great mates with Kenneth Anger and used to put him up when Anger was in London – was an art dealer who was hugely influential to the Beatles and McCartney in the Sgt Pepper era.

Without a doubt these people are all interlinked and further details can be found in other posts on this blog. 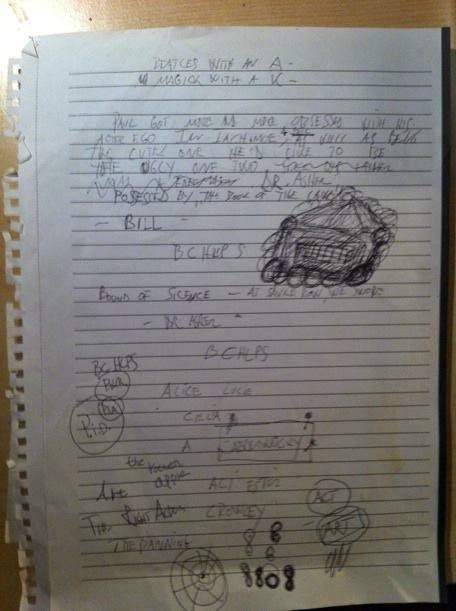 Beatles with an A - magick with a K


Paul got more and more obsessed with his alter ego Ian Iachimoe as well as being the cute one. He'd like to be the ugly one two....Dr Asher.....Possessed by the book of the law

Very cryptic. Difficult to know what to make of this accept it refers back to Asher and the book of the law and is, therefore, perhaps a reference to the mirrored message in Image 1? 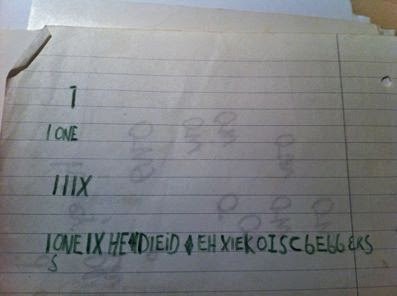 Contains the contents of the Sgt Pepper drum head mirrored message – I one IV HE DIED – written out with some other random letters and numbers. My first thought was that this was a mirrored message but I can only extract the word ‘peppers’, so, not sure the meaning of this one? 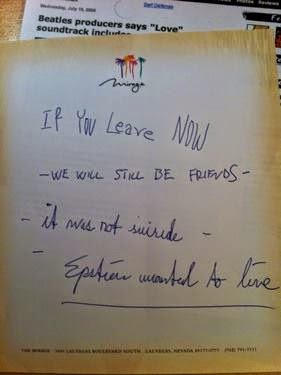 Whoever wrote this is not clear, however, it is on Mirage Hotel headed paper and behind it is a paper copy of the web article that referred to the Beatles Love album code that George and Giles Martin reportedly incorporated into the album and that Iamaphoney reputedly solved when he mirrored the word LOVE to produce the word CODE. The Love show that accompanied this album is performed at the Mirage hotel in Las Vegas, so, my guess is that we are to believe that this message came from one of the Martins?

This is as far as I have got; clearly there is a significance attached to statement 'it was not suicide - Epstein wanted to live' as it was included in the Facebook title. Hopefully more will be revealed but, in the meantime I would love to hear your thoughts and ideas.