The interesting tale of the Beatles, Tara Browne and Dandie Fashions

Dandie Fashions (sometimes spelt Dandy) was opened in October 1966 in Kensington Mews by Neil Winterbotham – who  would go on to become one of the owners of the Middle Earth nightclub and who was friendly with Beatles Magick Circle member Christopher Gibbs  - and Tara Browne, in order to promote Tara’s newly established tailoring business Foster & Tara. They were also soon joined by Freddie Hornik, future owner of Granny Takes A Trip in 1969, and Alan Holston, and, at some point, the Australian John Crittle.

Crittle, who is now principally remembered as being the father of the former ballerina and Strictly Come Dancing judge Darcy Bussell, would use his Beatles connections and that of the so called ‘Beatles Bentley’ to keep him in beer until his death.

However, as with most things Beatle related, there appears to be more to the story and so we shall delve into the reasons why the Beatles may have involved themselves with Crittle and Dandie fashions.

Shortly before Tara Browne’s infamous death in December 1966, Dandie Fashions had relocated to 161 King’s Road, where its outer facade would be designed and painted by the partnership Douglas Binder, Dudley Edwards and David Vaughn, and it was here that at the end of May 1968 John Lennon made his first public appearance with his new girlfriend Yoko Ono.

The boutique had become highly popular, largely due to the heady mix of the many famous customers it attracted, such as Brian Jones, Jimi Hendrix, David Bowie  and, of course, the Beatles.

Indeed, The Beatles took such an interest that in 1968 they bought the business and through it created Apple Tailoring, managed by Crittle alongside Apple manager Neil Aspinall and Apple accountant Stephen Maltz. However, given the friendship between Tara Browne and the Beatles – Paul McCartney in particular – you have to question why the Beatles did not choose to invest in the organisation upon Tara’s death. 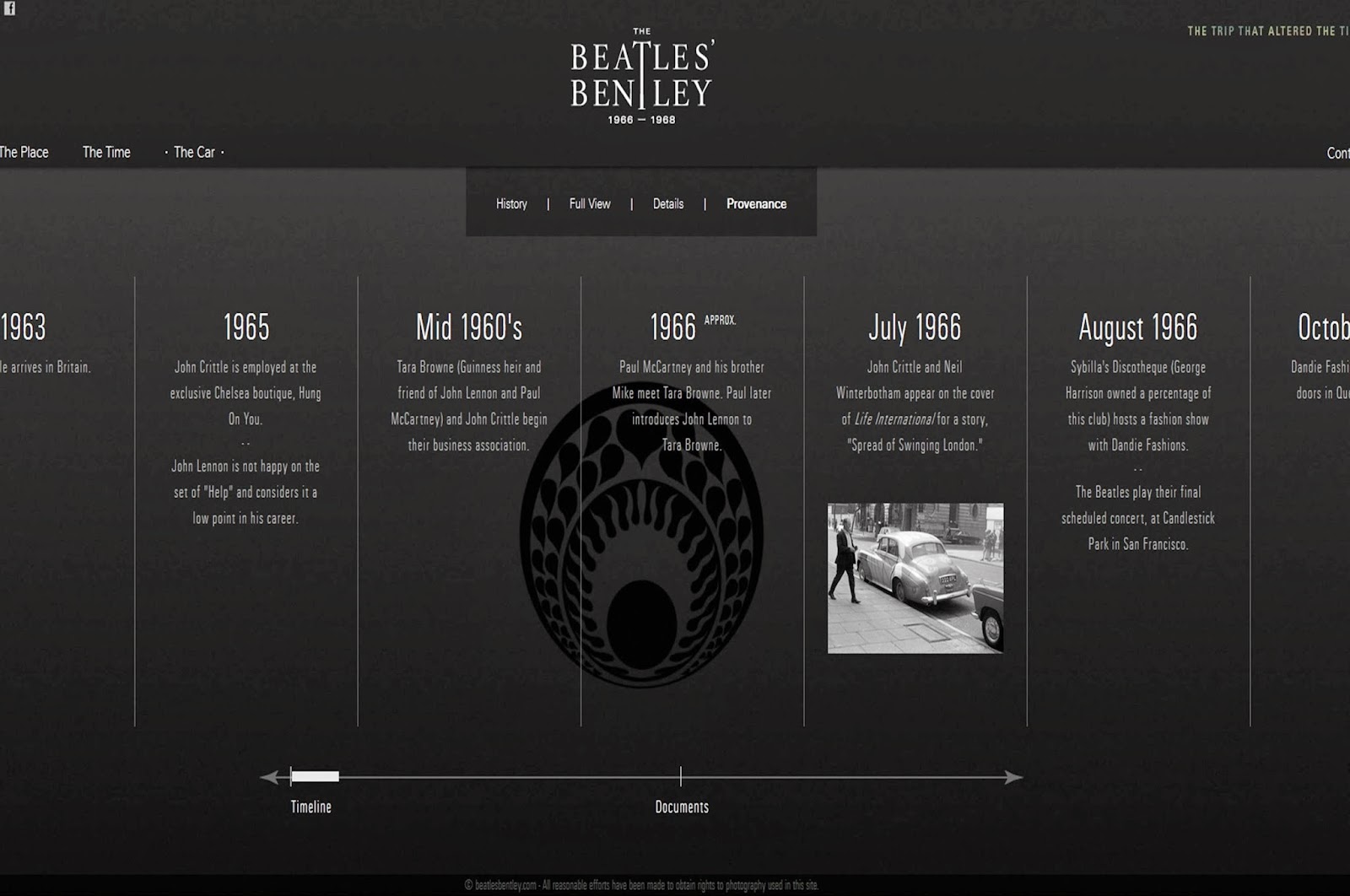 At that time, December ’66, Apple Corps did not exist, however, its precursor, Beatles Ltd was formed in early ’67 and Dandie Fashions would have made an ideal investment proposition. So, why the delay?

It is unclear what happened to Winterbotham’s investment and, presumably, Hornik and Holston were just employees, however, Crittle, by February 1968, seemed to have assumed a controlling interest. Indeed, George Harrison’s recollection was that "we bought a few things from [John Crittle] and the next thing we knew, we owned the place!" So, what prompted the investment?

A quick glance at the share transfer documentation reveals that Tara’s cut seems to have transferred to his brother Garech – the other two names mentioned, Ian Ferris and James Cawley, both being, I believe executors of Tara’s will – which in turn implies that Tara must have deliberately left everything to Garech as, normally, all his possessions would have automatically been transferred to his wife, Nicky. 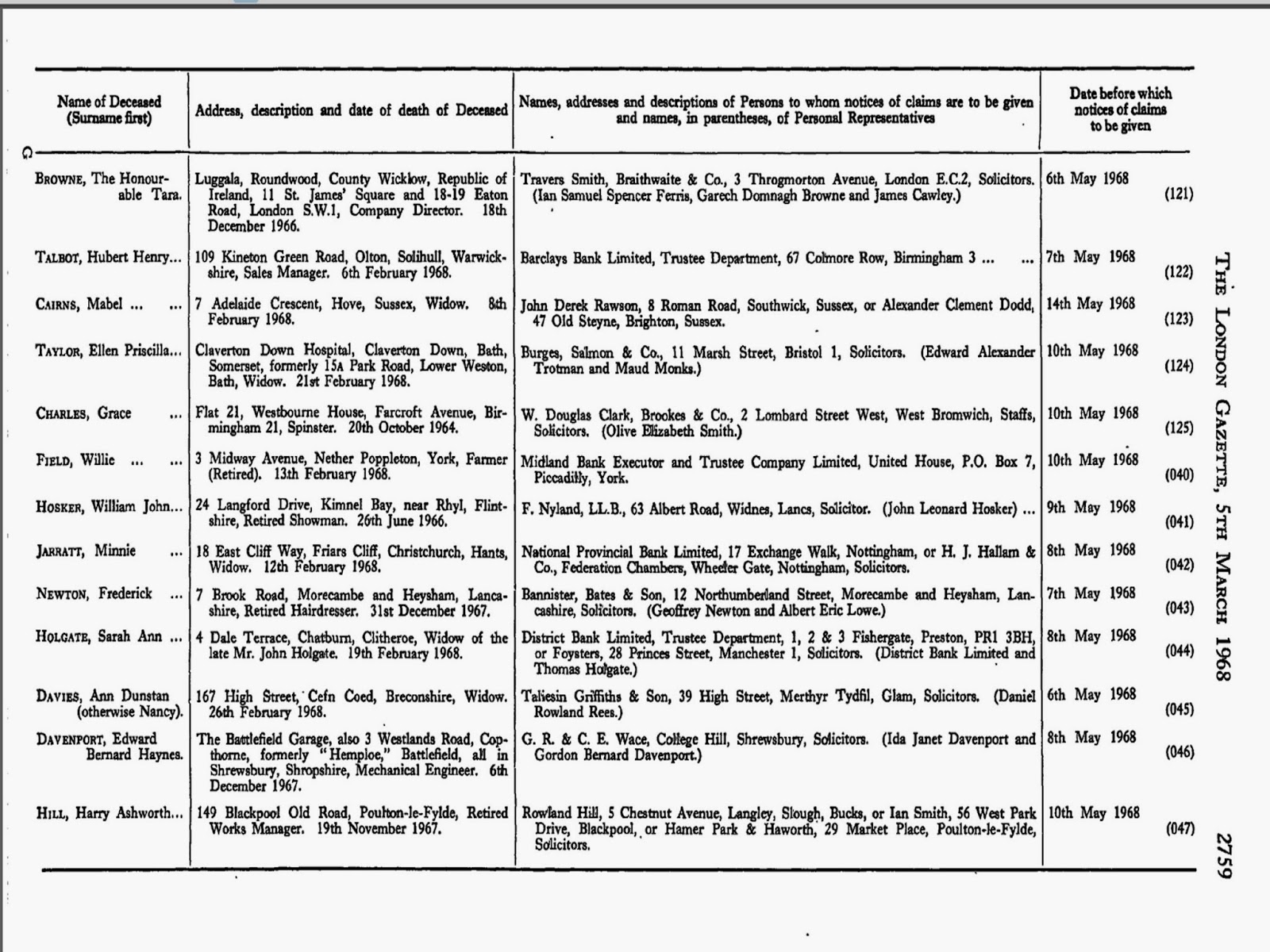 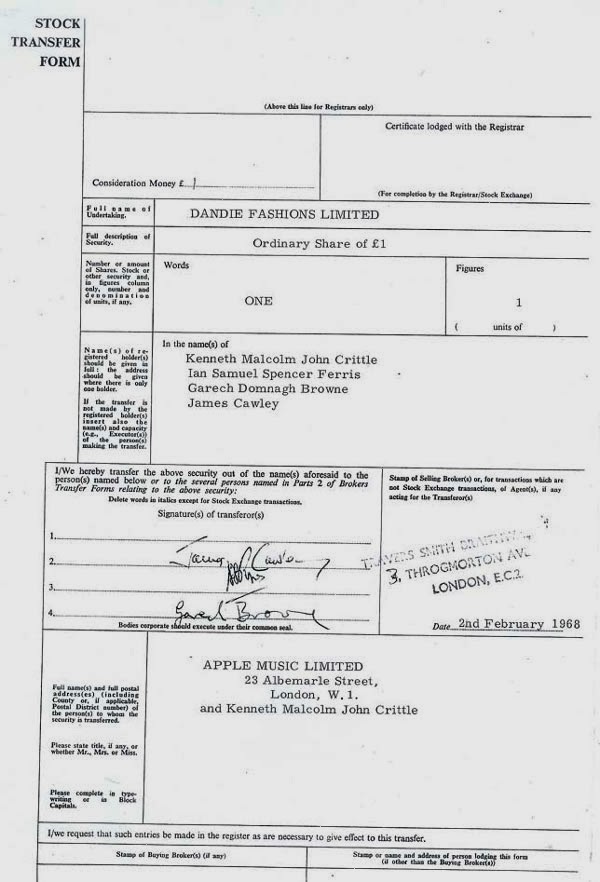 We know from Amanda Lear that Tara was seeking a divorce from Nicky, but, there also appears to have been an unnatural amount of partner swapping going on at this time. Amanda Lear, a model, is rumoured to have been born a man; however, she was dating both Brian Jones and Tara Browne whilst also being ‘friendly’ with John Crittle. Tara, meanwhile, despite being newly married with two small children, had flown back from Paris, where he had been hobnobbing with Amanda and Salvador Dali, to attend to the model Suki Potier, with whom he would share the fatal car ride. Suki, upon Tara’s death, would then fall into the arms of Brian Jones, with whom she would share the misfortune of dead boyfriend syndrome when Jones failed to surface after his late-night swimming ‘adventure’ in 1969. One dead boyfriend is unfortunate, two, however, is just plain careless. Suki would, in 1981, succumb to her own car related death incident when she drove her Bentley off a cliff in Portugal.

So, back to the question in hand, why did the Beatles get involved in Dandie? Well, one possible explanation may lie in a 1967 drugs bust that occurred on the Dandie premises during which Crittle was nicked. Could it be that Crittle was protecting a drug using and / or sexually compromised Beatle?

Interestingly, one other individual who was present at this bust was the aforementioned Amanda Lear!


Rumour has it that deal involved the Beatles buying all of John Crittle's shares in Dandie in exchange for 1% ownership of Apple Corps. Now that is quite a deal! On top of which, when the Beatles tired of this arrangement they, conveniently, walked away from Apple Tailoring as it was then called and left Crittle all the stock and the premises. Paul McCartney issued a press statement declaring that "The Kings Road shop, which is known as Apple Tailoring, isn't going to be part of Apple anymore. But it isn't closing down and we are leaving our investment there because we have a moral and personal obligation to our partner John Crittle, who is now in sole control."

Nice work if you can get it.

As a final thought, I came across an interesting comment on a website pertaining to John Crittle that said that he finally left England…on the run from the UK tax-man and the consequences of a drunken road-accident, with John at the wheel of a snazzy sports car, in which the scion of a minor English aristocrat lost his life …