Terry Knight was the inside man


Some time ago, in a blog piece entitled The Beatles, theOTO, Terry Knight and Detroit I speculated that Terry Knight was responsible for seeding the Paul is Dead myth around the University campuses in and around Detroit from whence the phenomena first emerged.

Well, I recently came across a new piece of evidence which, I believe, substantiates this. Before I get to this I feel a little recap is in order.

For reasons unknown in 1968 Detroit DJ and musician Terry Knight sat in on a Beatles recording session for the White Album where he witnessed an argument that led to Ringo Starr walking out, temporarily, on the band.

It seems apparent that Knight had travelled to London that year in order to bag a recording contract with the Beatles newly formed Apple records company, however, despite the fact that band were handing out contracts to anyone with a pulse at this stage, Knight was unsuccessful.


Quite why then he should be in the incredibly fortunate position to have sat in on the recording session is a mystery, unless he had been selected for a higher purpose?

Shocked, apparently, at what he had witnessed in the studio Knight would go away and pen a song entitled ‘Saint Paul’ with some rather cryptic lyrics which he maintained concerned his, brief, relationship with McCartney and his belief – in which he would be proven correct -  that the Beatles would soon split.

As we know, once the Paul is Dead myth emerged the lyrics would be assumed to be about Paul’s demise and form another strata in the layer of clues. Why the song should be about Paul though and not the clearly hurt and upset Ringo also remains a mystery.


Having been blown out by Apple Knight would go on to land a ‘producers’ contract with the Beatles US label, Capitol, the following year, 1969, which allowed Knight to release solo material. Who he was producing and why Capitol didn’t just give him a recording artists contract is yet another, you guessed it, mystery.

Using this contract, in April 1969,  Knight released ‘Saint Paul’ with its refrain of ‘hey Paul’ to the tune of “Hey Jude” as well as vocal lines from "Hello, Goodbye", "Lucy in the Sky with Diamonds" and "She Loves You" apparently without anyone at Capitol realising the potential copyright infringement. In time, this was noticed and the song would be re-issued as the only ‘non-Beatle’ song credited to Lennon and McCartney’s MacLen Music company.

Nothing much happened until October 12th 1969, when a caller to WKNR-FM radio station in Detroit, Michigan from Eastern Michigan University announced that McCartney was dead and that the DJ should play the Beatles’ song “Revolution 9″ backwards.  The Detroit radio DJ, Russ Gibb, did as he was instructed and reported on the airwaves that he thought he heard phrases to the effect of, “turn me on, dead man.”  Soon, Gibb was telling his listeners what he had found and was also adding to the list of clues.

Meanwhile, on October 14, 1969, college students at the University of Michigan in Ann Arbor published a satirical review of The Beatles’ Abbey Road album in The Michigan Daily.  This story stoked the “McCartney-is-dead” claim with “new evidence,” offering various “clues,” some supposedly found in any number of Beatles’ songs and/or album covers.  This story, in turn, was picked up by various newspapers across the U.S. and escalated nationally.

So, where was Knight at this time? Only touring small venues and university campuses in Michigan!

Now, here is where the new stuff comes in, on November 8, 1969, the advert below would appear in the American music journal Cash Box. 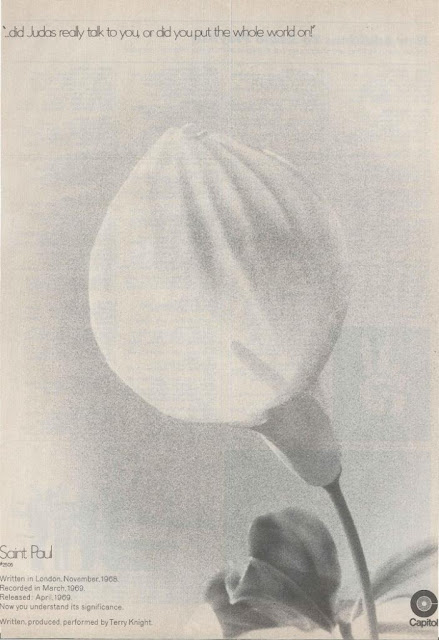 The previous day, November 7, 1969, the now famous Life magazine, in which McCartney was the cover star and would deny his demise, was published. Now how could Terry Knight and/or Capitol have known about the Life article if they weren’t intimately involved in the whole thing?

To paraphrase the advert strapline, now I do understand its significance! Oh, and is that a lilly I see before me?

UPDATE:  Here is a bit more detail, from Knight, about how Saint Paul came to be...

Extract from a Terry Knight interview.

TK: Yes, I recall meeting McCartney very well. We first met in Detroit and shared a brief hello. Later, he called me to England, Apple bought me a plane ticket, he invited me to sing. We had lunch in London with Linda and Twiggy, Roger Moore and Peter Sellers - and then I went to the studio where Yoko and Ringo and everyone else was assembled. It was the session where it was over [Ringo walked out during White Album sessions]. I went back to New York empty-handed and wrote the song "Saint Paul" on the flight.

PSF: Are you aware that the song is credited with starting the "Paul-is-dead" rumor?

Here we get a slightly different version...

While down in Florida for a gig, Knight began hanging out with the gorgeous
young waif of a British model known as Twiggy. She was the apex of mod
Sixties fashion in swinging London, the toast of Carnaby Street, and Knight
(of course) was smitten. Twiggy, who was quickly developing into an actress
and performer to go along with her modeling career, knew all the cool people
in London, and she took a liking to this guy Terry Knight.

"Twiggy put me on tour with her, to warm up the audience with a few songs
with the guitar," he recalled. "And then they'd introduce her, on this great
Revlon [cosmetics] U.S. tour, when she was at her peak. One night I was in a
hotel room in Miami, singing these songs. And she just fell in love with the
songs - and me, I guess. We never had a romantic relationship, but we were
very, very close."

"The following day," Knight recalled, "Justin, her manager and boyfriend,
came in the room and said, "You have a long distance call from England. You
better come and take it - it's in my room." So I raced to his room, pick it
up: "Hello" [Knight doing proper British accent]: "Terry Knight?"
[Knight]: "Yeah?" [English guy]: "This is Paul McCartney." [Knight]: "Yeah,
who the fuck is it, really?"

"Anyway, it was Paul," Knight said. "Twiggy had recently discovered an
unknown girl named Mary Hopkin. Mary had done a wonderful record for Paul
called "Those Were The Days." And she had discovered James Taylor, by the
way, for Apple. Paul was told by Twiggy that he dare not miss the opportunity
to sign Terry Knight!"

"Just as Paul stated on the phone, there was an airline ticket [reserved for
Terry Knight], first-class, to and from London, England," Knight said. "I
got to England just as The Beatles broke up. I was actually present at the
studio the night the whole shit fell apart."

The time period would naturally have to be late 1968, during the time The
Beatles were finishing up recording of The White Album, when the group very
nearly did break up, before coming back together for another year or so.
Ringo had walked out on the others, apparently right before Knight arrived in
London. Terry also mentioned that he recalled seeing Bob Dylan hanging around
the studio with the remaining Beatles.

"Before flying back," Knight said, "I learned Graham Nash had just left The
Hollies. Tony Hicks of The Hollies came over to Ringo's flat, where I was
staying, and offered me Graham's job, with The Hollies. I turned it down."

"I did not want to be a frontman anymore, ever," Knight said. "The
experience with The Pack was so devastating to me, going through egos was
just not part of my plan again - unless I was in control of them. So I said
no politely, thanked him, and came back to America."

The ironic thing was that, after McCartney had summoned Knight to London,
paid for his trip and arranged for him to be put up at Ringo's flat, he
didn't even have time to see Knight. The problems The Beatles were
experiencing right at that moment precluded McCartney from considering what
talents Knight might have to offer Apple Records.

On that TWA flight back from England, Knight said, "I wrote a song, which
I recorded myself for Capitol, called "Saint Paul." It was about McCartney.
I went back to Cleveland to record it, and used the entire Cleveland Symphony
Orchestra. My buddy, Joe Walsh, sat in on the session. Anyway, that's how
Paul and I met. I met Ringo in Detroit, and George in Detroit, but was never
really close or friendly with either of them."

"Saint Paul" is a Beatles curio, to be sure, and perhaps the most
interesting record that Terry Knight made as a singer. (It was also one of
his final attempts to make it as a vocalist.) Capitol did release it, and
apparently Paul didn't mind being the subject of the song, but he did mind
that Terry had borrowed melodies and/or recognizable passages and lyrics
from various Beatles songs, which included "Hey Jude," "Strawberry Fields,"
"A Day In The Life," "Lucy In The Sky With Diamonds," "All You Need Is
Love" and even "She Loves You".


Not sure how much I believe, but, interesting none the less.