One of the recurring themes in the work of Iamaphoney are his references to Paul’s trip to Kenya in November 1966.


Up to now I was not aware of any evidence to substantiate his claim that Paul was hospitalised on that trip, however, an article in the January 1967 Beatles Monthly magazine has come in to my possession which does, albeit vaguely, confirm that something happened. 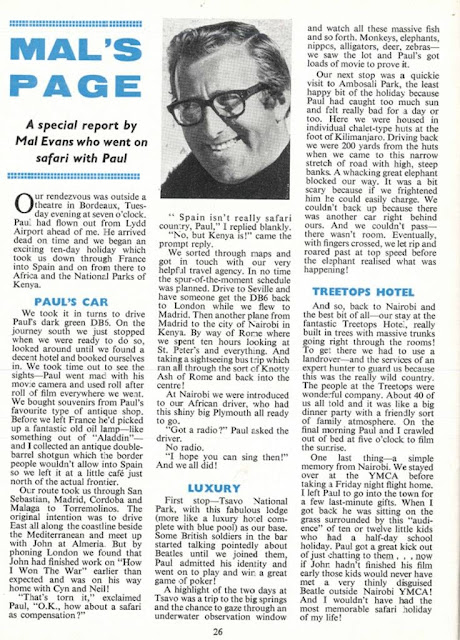 However, as with most things Beatles, all is not as it appears.


As you can see Mal claims that the trip began on a Tuesday, which given the other information the article yields, must have been the 8th November, – an auspicious date in Beatles circles as it seems to have been the date John met Yoko at her exhibition at Indica and, possibly, also the day that Roman Polanski and Sharon Tate popped by to play chess – however, according to the Beatles Bible they met in France on Saturday 12th November at the Saint-Eloi catholic church, on Rue Saint-James in Bordeaux. Further, the ever reliable McCartney biographer and propagandist, and erstwhile owner of the aforementioned Indica Bookstore and Art Gallery, Barry Miles in his book Many Years From Now states that McCartney said..."We met up, exactly as planned, under the church clock. He was there. I figured I'd had enough of my own company by then. I had enjoyed it, it had been a nice thing. Then we drove down into Spain but we got to Madrid and we didn't know anyone; the only way would have been to go to a club and start making contacts. So we thought, this is not going to be any fun, and rang the office in London, and booked ourselves a safari trip."


Dear old Mal, bless him, informs us that they had been planning on joining up with John in Spain only to discover, via a telephone call, that John was already back in London having finished filming How I Won the War, and had abandoned both Neil and Cyn and was, instead, heading off, under his own free will, to Indica where he would be set up with his handler.


Given that Neil and Mal worked in tandem on their on-going Beatles arse-wiping mission it seems almost impossible that Mal would not have known exactly where Neil and John were at that time. Add to that the fact that in order for operation ‘brainwash Lennon’ to work would almost certainly require that nosey old McCartney was well out the way at the time then this Gallic sojourn is just too convenient. Because, although Yoko had never heard of the Beatles before, the fact that she had knocked on McCartney’s door the year before and begged him for a shag might have spoilt the romantic frisson between her and Johnny a tad!


Of course who knows what dates to believe? The Beatles Bible claims that McCartney went to France on 6th November 1966 – 666 anyone? – and then met Neil on the 12th whilst also claiming that John arrived back in London on the 6th (666 again), meaning that Mal would have had a full six days in which to have learnt about the early cessation of filming and, thereby, negating any need to phone London for a Lennon update. Confused? You will be!


McCartney meanwhile, again according to the Beatles Bible, was busy trying hard not to be a Beatle complete with “the moustache and glasses disguise he had prepared to allow him to travel incognito”. So, it was a fake moustache?


The Beatles Bible also claims that Paul and Mal met up with Jane Asher before flying on to Kenya but, poor old Mal, completely forgets about this. To be fair I have not seen any evidence to suggest that Jane was in Kenya and none of Mr Phoney’s footage, that I have seen, shows her.


The significance, or at least inference, in Iamaphoneys Kenyan reference is that it was here that the replacement ‘Paul’ received the plastic surgery that he needed to transform him into a fool-proof McCartney. This seems to come from extracts of a document that, we are meant to assume anyway, is a segment of the long lost memoir of Mal Evans, wherein there is an intriguing line that says ‘they did a good job in Nairobi’ and talks of a clinic in Kenya. 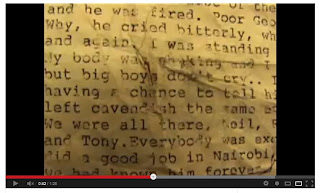 It is telling then that the Beatles Monthly piece confirms that whilst at Ambosali Park (actually Amboseli) Paul ‘had caught too much sun and felt really bad for a day or too’ (sic). Is then when the alleged plastic surgery took place? We will probably never know, however, recovery from surgery would surely take more than two days?


At the very least herein lies the germ of the story and from, though an official Beatles organ, a far from reliable source. The Beatles Monthly Magazine was an outlet by which Billy Shepherd a.k.a. Neil Aspinall could plant the stories that would later seed the Paul is Dead myth. It is pertinent to remember that this article from the January 1967 edition was just a month before the famous ‘false rumour’ article in which a story about Paul dying in a car crash was first suggested. 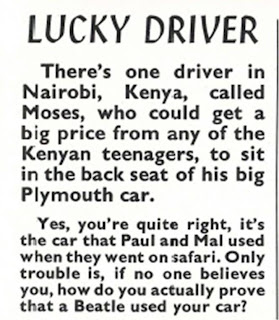 Further evidence, though I concede not proof, that the entire Paul is Dead myth was perpetrated by the Beatles and exacerbated by Neil Aspinall before he founded the iamaphoney.org in 1990, not coincidentally, at the same time that the Beatles Anthology project was commenced. The more I dig the more I become convinced that the Iamaphoney series is a means of utilising unseen footage compiled for the aborted ‘Long and Winding Road’ project, that was in essence a proto anthology, and that it presents a secret Beatles history.