"All antiquity believed ...in a Mediator or Redeemer, by means of whom the Evil Principle was to be overcome and the Supreme Deity reconciled to His creatures. The belief was general that he was to be born of a virgin and suffer a painful death. The Hindus called him Krishna; the Chinese, Kioun-tse; the Persians, Sosiosch; the Scandinavians, Balder; the Christians, Jesus; the Masons, Hiram"

It is my belief that the Sgt. Pepper cover is a coded reference to a Masonic initiation ceremony and there does seem to be a lot of evidence to back this up. 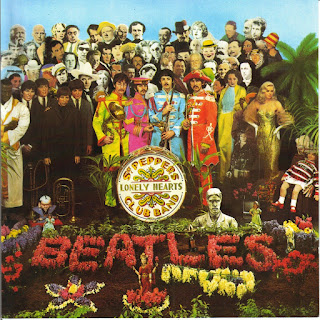 If you take your copy of Sgt Pepper and scan down the lyrics to the opening track, ‘Sgt Pepper’s Lonely Hearts Club Band’, you will find that the opening letters, capitalised, to the last four lines begin with the letters, S.T.A.B.

Go now, to the third track ‘Lucy in the Sky with Diamonds’, and beginning with the line ‘A girl with kaleidoscope eyes’ and you will find the lines begin with the letters A.C.T. Stab Act.

This ‘Stab Act’ could possibly be interpreted as a reference to Hiram Abif and, therefore, relate to the Third Degree of Masonry. The following text comes from here; http://www.christian-restoration.com/fmasonry/hiram.htm


The Blue Lodge (degrees 1 - 3) are centred upon the legend of Hiram Abiff. This legend loosely has its historical basis in 1st Kings 7 and 2nd Chronicles 2.  King Hiram of Tyre sent a skilled man, also called Hiram, to Israel to help King Solomon build the Temple of the Lord.


Hiram Abiff, "a widow's son" from Tyre, skilful in the working of all kinds of metals, was employed to help build King Solomon's Temple.

The legend tells us that one day, whilst worshipping the Grand Architect of the Universe (GAOTU) within the Holy of Holies, Hiram was attacked by three ruffians, (called 'Jubela', 'Jubelo' & 'Jubelum' and known collectively as 'The Juwes') who demanded the "Master's word", that is, the secret name of God.

Hiram, having been killed, was carried out the East gate of the Temple and buried outside Jerusalem on Mount Moriah.

Early the following morning, King Solomon visited the temple and found the workmen in confusion because no plans had been made for the day's work. Fearing evil had befallen Hiram, King Solomon sent out twelve Fellowcraft Masons to look for Hiram. King Solomon himself accompanied the three who journeyed towards the East.

Having finally located the grave of Hiram, Solomon and his fellow Masons exhumed the body. A search was made for the Master's word (the Name of God), but all that was found was the letter "G".  Finding the word lost, a lament went up: "O Lord, my God, is there no help for the widow's son?".


They first took hold of Hiram's body with the "Boaz" grip of the first degree. This failed to achieve its purpose.


They then re-positioned their hold upon Hiram's body using the "Jachin" grip of the second degree. This also failed to accomplish its purpose.


Solomon finally raised Hiram from the dead by using the third degree grip of the Master Mason, the five points of fellowship (explained shortly), and by uttering in Hiram's ear the phrase "Ma-Ha-Bone".

These first three degrees are based upon the legend. The Scottish and York Rites base themselves largely upon the Hiramic legend that follows after Hiram Abiff's 'resurrection'.


Hiram Abiff has been raised from the dead.  However, he soon leaves the legend, for he has been ushered into a more glorious existence.

Solomon is left to continue building the Temple. Many decisions have to be made. Solomon first selects seven expert masons to guard the Temple, before holding a requiem for the departed Hiram Abiff. Solomon then appoints seven judges to hand out justice to the workmen building the Temple.


Five superintendents are installed to oversee the continuing building of the Temple. Solomon then focuses upon apprehending the assassins of Hiram Abiff. He appoints nine Masters, who begin the search for the assassins. The first assassin is discovered asleep. He is stabbed in the heart and head, then decapitated.

It is upon this tale that the basis for the Masonic initiation ceremony is formed. Within these ceremonies the candidates – those being initiated – will find themselves being held down and turned around and being asked for a secret password.

So, to return to Sgt. Pepper, if we go to track four – immediately after the STAB ACT clue – we find the song ‘Getting Better’ which includes some intriguing lyrics; in the first verse:


It's getting better all the time

I used to get mad at my school (No, I can't complain)


The teachers who taught me weren't cool( No, I can't complain)


You're holding me down (Oh Oh)


Filling me up with your rules(Oooh)

And in the second verse:

Me used to be angry young man


Me hiding me head in the sand


You gave me the word, I finally heard


I'm doing the best that I can

Viewing the lyrics from the perspective of a Masonic initiation one could argue that they talk about the initiation itself and then the effects of that initiation on the candidate.

Holding me down. Restrained so that you will know the true meaning of freedom.

Turning me round. Blindfolded and turned round  so you don't know your direction or path. Ritual teaching one to know their direction and point of view.

You gave me the word. The replacement terms given to the candidate in place of the lost name of God.