The Beatles and the wicked dentist

A lot has been said, and claimed, about the Beatles and their LSD use back in the sixties. Certainly John Lennon opened a can of worms in 1980 when he claimed in a Playboy interview that “We must always remember to thank the CIA and the Army for LSD. That's what people forget. Everything is the opposite of what it is, isn't it, Harry? So get out the bottle, boy -- and relax. They invented LSD to control people and what they did was give us freedom”.

Add to that the inclusion on the Sgt. Pepper sleeve of well-known LSD advocate Aldous Huxley and the Beatles connections to the likes of Ginsberg, Leary and Burroughs and it is a conspiracy theorists wet dream. Most revolve around the theme that it was all a plan by the CIA and the Tavistock Institute to control youth culture and the Beatles were their patsies.

Certainly the CIA funded MK Ultra project demonstrates governmental interest in such schemes, however, whether the Beatles were involved, knowingly or not is a matter of conjecture. The purpose of this article is to revisit John and George’s first experience with LSD and to consider the possibility that they were being manipulated right from the off. 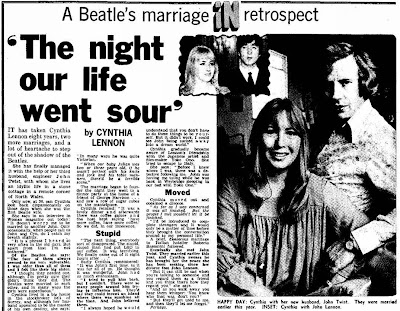 The episode took place in April 1965 in Bayswater, London at the home of Dr John Riley, or, as he was known in the Beatles Anthology the ‘wicked dentist’. It had been an inconsequential evening of socialising shared by George, John and their wives Cynthia Lennon and Patti Boyd and George's dentist, who had just drifted over their social horizon. Then the five, accompanied by the dentist's wife, adjourned from the small dining room to the lounge, where the dentist slipped LSD - a substance then as little known to the Beatles as to most in Britain - into their coffees.

Riley’s wife was a Canadian woman living in London called Cindy Bury who was the bunny mother at a Playboy club. It has been claimed that Riley was sufficiently immersed within the Beatles sphere that he was in the Bahamas with them during the filming of ‘Help’.

Riley, the son of a Metropolitan police officer, it seems, was a south Londoner destined for life as an NHS dentist in north London, until heading to the Northwestern University dental school in the US and returning as one of Harley Street's few cosmetic dentists.

As an aside, Riley would later supply the false teeth used in the Roman Polanski movie, the Fearless Vampire Killers.

His LSD supply was manufactured at a farmhouse in Wales. This fact is interesting because back in the sixties and seventies the West Wales village of Llanddewi Brefi became a secluded hang-out for some of the world’s biggest rock stars – thanks largely to an underground cottage industry making millions of pounds’ worth of mind-bending LSD. It has been claimed that those involved were said to have been responsible for 90% of the LSD produced in Britain and 60% worldwide.

David Litvinoff, a sixties gangster who was an associate of the Krays and who worked as an advisor on Donald Cammell’s 1968 film Performance, was a local resident. It is pretty certain that Bob Dylan stayed at Litvinoff’s house for six weeks during the summer of 1969, just after he’d been at the Isle of Wight pop festival. Keith Richards from the Rolling Stones has admitted that he’d been to Llanddewi Brefi too and that whilst staying there he’d used “every illegal drug in existence and some which weren’t in existence!”

Clearly any link between Litvinoff and Riley is purely circumstantial, however, it does make one wonder if this was part of an established plan to lure the Beatles into the LSD sphere?

Therein lies the story of the Beatles first experience of LSD, their second, lest one forget, took place in California, according to John Lennon at “Doris Day’s House” otherwise known as the Tate/Polanski residence!